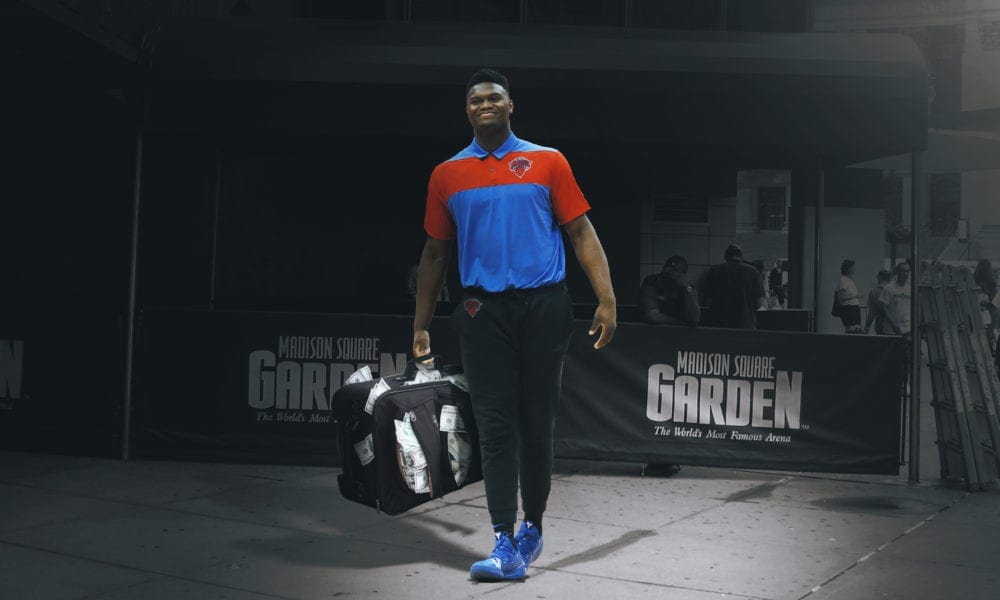 The biggest of all the big market teams had the equal-best odds of landing Zion Williamson, but instead he’ll be playing in the smallest market there is.

Zion is bound for New Orleans, not New York as everyone hoped.

There’s no way to know exactly how much more money Williamson would’ve made in New York, but we can get a pretty good idea by looking at LeBron’s earnings.

LeBron is the perfect point of comparison because no one has been as marketable as Zion since LBJ, and he too was pursued by the Knicks.

When James entered free agency in 2010, the Knicks made one of the boldest free agent pitches in league history.

Their message was simple: they believed LeBron could become a billionaire athlete in New York, and only New York, assuming he spent the rest of his career there.

The team even hired global branding consultancy Interbrand to crunch the numbers and prove it (more on that here).

So, to work this thing out, let’s start with how much LeBron has earned throughout his career so far, including endorsements.

That figure sits at about $765 million, according to ESPN.

That’s $47.8 million per year on average, and if he continued at that rate until 2023 – the same year the Knicks’ projection used – he would finish his career with total earnings of $956.3 million.

Interestingly, in another part of the Knicks’ presentation, they stated that by signing with them, James could raise his future earnings by 15 percent.

If you add a 15 percent bump to LeBron’s overall income from 2010-2023, when he theoretically would’ve been playing in New York, he would’ve finished his career with $1.05 billion.

Related Article:  Winners And Losers Of The Wildest Draft Lottery Ever

But unlike LeBron, Zion could’ve played his entire career in New York (if things had gone a little differently at the draft lottery and the Knicks fought their natural urges to trade him for cap space).

So how much could Williamson have made if he was a Knick for life?

Even if Zion only has 70 percent of LeBron’s earning power, that’s still $100 million he’s missing out on.

None of this factors in things like New York’s property prices and living expenses, but $100 million is still a hell of a lot of cash.

Even on the highest NBA salary possible, it would still take three years to earn that money back.

Let’s just hope for Zion’s sake that playing in New Orleans is worth it.