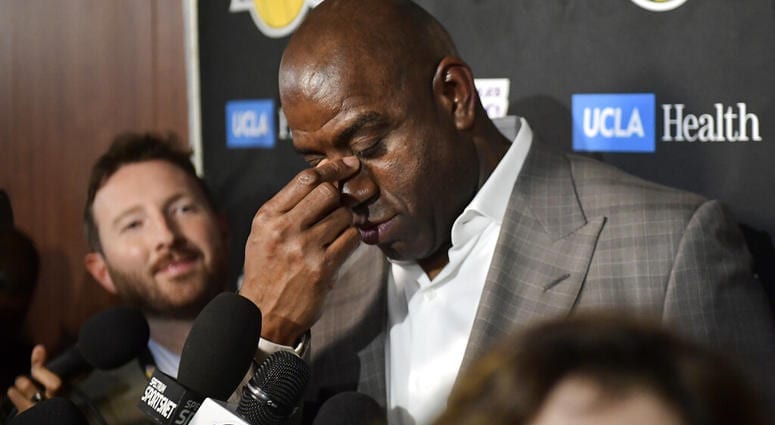 Unsatisfied with the awful series of moves he made as Lakers president, Magic Johnson is now hurting the team in other ways.

He accepted an invitation to appear on First Take this week, and while on the show he accused Rob Lowe, I mean Rob Pelinka, of betrayal and backstabbing.

Magic’s reasoning was that Pelinka wanted his job, even though Magic had explicitly told him he’d only be around for three years and wanted to groom him to take over.

Related Article:  Here’s How Much Money Zion Williamson Will Lose By Playing In New Orleans Instead Of New York

That third year would’ve been this season… the one which, you know, went up in flames.

Johnson’s logic made no sense whatsoever and the longer his interview went on, the more baffling it got (remind you of anything?).

Pelinka, who was peppered with Magic-related question at Frank Vogel’s introductory presser, denied everything and seemed legitimately upset about the whole thing.

Man, just another day in the life of the Los Angeles Knicks.

Damian Lillard is expected to sign a four-year, $191 million supermax deal with the Blazers this summer.

The NBA All-Rookie Team has been named and Luka Doncic, Trae Young, DeAndre Ayton, Jaren Jackson and Marvin Bagley all made the cut.

David Griffin says he’s confident he’ll have both Zion Williamson and Anthony Davis on his roster next season. Of course, he would say that to maximise his trade leverage with AD.

Draymond Green hasn’t changed his mindset from the day he called Kevin Durant in the parking lot after losing the 2016 Finals, telling reporters the Warriors still need KD to win it all.

The Warriors are the first team to make five consecutive Finals since the 1966 Celtics.

Terry Stotts has signed a multi-year extension with the Blazers.

Across the 41 possessions that Kawhi guarded Giannis in Game 3, the Greek Freak had 4 points and 3 turnovers on 2-12 shooting.

Giannis has looked somewhat uncomfortable against him all series, which is why I like the under on his total points heading into Game 4.