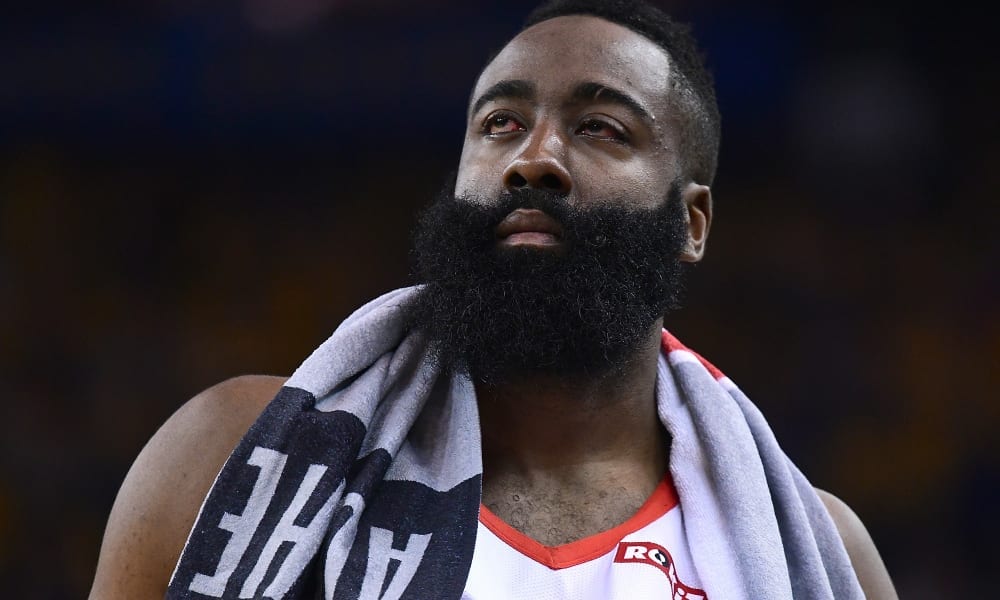 To finally overcome the Warriors, the Rockets will need to summon every ounce of firepower that their hyper-modern, three-point-littered game can offer.

And in order to do that, they’re going to need a healthy James Harden with both of his eyeballs in fully functioning order.

Harden finished Game 2 with contusions in both eyes and a laceration on the inside of his left eyelid when he was inadvertently struck by Draymond “the eyeball collector” Green.

Harden’s doctor has cleared him for Game 3 but it’s hard not to wonder how far from 100 percent he’ll be after complaining of ongoing pain and the inability to be around bright lights earlier today.

If there’s one thing that really helps with performance, it’s the gift of sight, as Steph Curry proved earlier this season.

Here’s hoping Harden’s eyes recover in time, because a loss on Saturday will mark the sad and premature death of the series.

D’Angelo Russell has been caught with marijuana, which he unsuccessfully tried to hide in a can of Arizona Iced Tea.

Danny Ainge has suffered a mild heart attack but is expected to make a full recovery.

Greg Oden, Larry Sanders and Royce White have all been drafted into the BIG3.

Moe Harkless is awaiting the results of an MRI on his right ankle. Harkless has started every playoff game for the Blazers, averaging 8.9 points and 5.6 rebounds in 26 minutes.

The Lakers are trying to navigate their ongoing power balance with LeBron James.

Enes Kanter wants Nuggets fans to get their shit together.

Klay Thomson says he committed to becoming a kickass defender to take pressure off Steph Curry.

The Grizzlies are showing interest in Lithuanian coach Sarunas Jasikevicius. Jasikevicius will join Giannis Antetokounmpo as the only other NBA name writers never learn to spell because they copy and paste it every single time.

Related Article:  Kevin Durant Could Get His Own TV Show If He Signs With The Knicks
-->