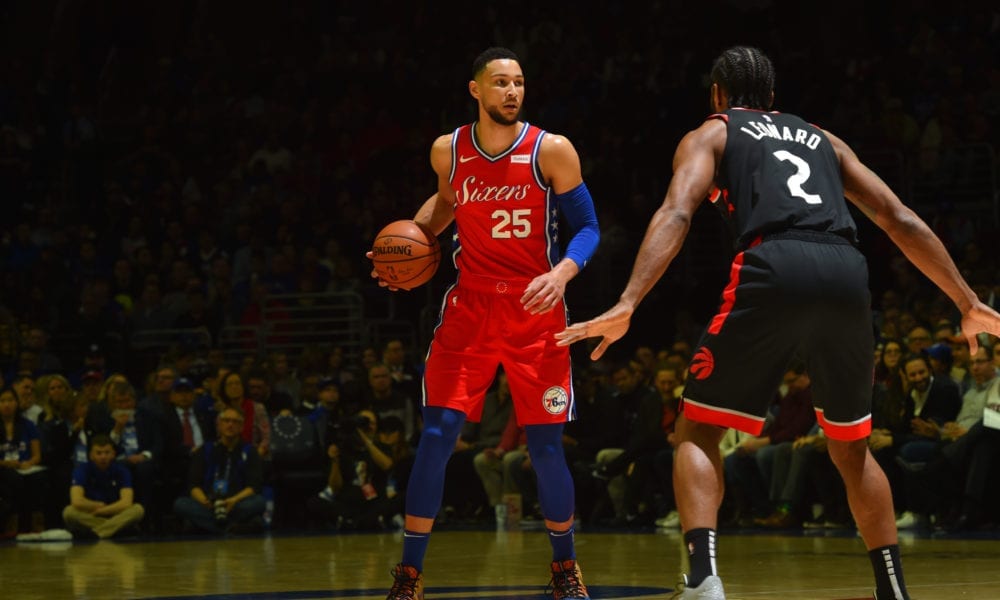 That is the task confronting Ben Simmons, who will be guarded by Kawhi Leonard for much of the 76ers’ second-round series against the Raptors.

No one has given Simmons more trouble than Leonard.

In the first two of his three games against Leonard this season, the towering Aussie averaged 9.5 points and 9 turnovers, and the Sixers lost all three games by an average margin of 13.3 points.

Simmons posted better numbers in his final matchup against Kawhi – 20 points, 7 rebounds and 6 assists – but he still had 6 turnovers and did a lot of his damage once the game was already out of reach.

Leonard guarded Simmons for 115 possessions across the regular season and held him to 17 points and 10 assists, while forcing nine turnovers.

The broader problem here is that Simmons’ struggles have had a devastating effect on the rest of his team.

When Simmons was on the floor without Leonard during those matchups, the Sixers scored 110.6 points per 100 possessions.

But when Leonard joined him on the court, that number dropped to 103.4.

For context, no team in the league had an offence that bad across the entire season, not even the G-League All-Stars, I mean New York Knicks.

And even when Simmons gets a reprieve from Leonard during the playoffs, he’ll still have to deal with the horrors of Pascal Siakam and Danny Green.

So much like Theon Greyjoy in Game of Thrones, the moment he thinks he’s escaped the torture chamber, he’s led right back into it.

Kawhi’s success against Simmons stems not just from his otherworldly defensive tools, but from his unique approach.

Most players have backed right off Simmons in an effort to wall off the rim and encourage him to shoot his wonky jumpers.

But Leonard zigged when everyone else zagged.

That much became clear when he stepped right up on Simmons during their first encounter earlier in the year and stripped him clean.

Ever since, Kawhi has stuck close to him with remarkable success.

For most defenders, this kind of defensive treatment come with far too much risk and potentially fatal consequences, thanks to Simmons’ ability to blow by defenders and finish with authority.

But for Leonard, his one-of-a-kind skillset, strong frame and fast hands make the risk worthwhile.

The turnovers he forces are absolute game-changers.

They swing the momentum the Raptors’ way, throw Simmons off his game and deprive Philly of getting into their sets.

That’s clearly not going to be tenable for the Sixers across a seven-game series, even if the Raptors stick with tradition and choke in Game 1.

Related Article:  Celtics Might Have Increased Their Lead On Lakers In Race For Anthony Davis
-->