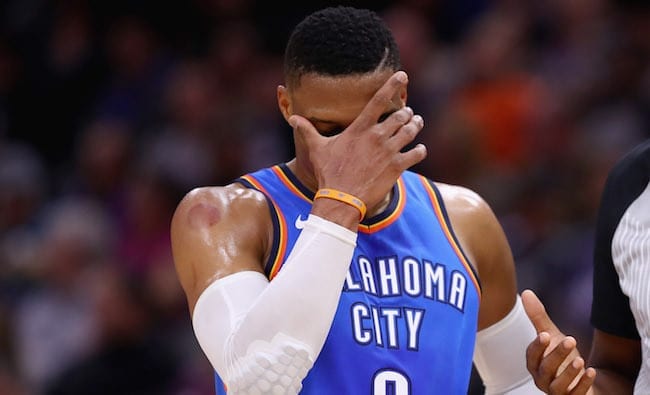 Russell Westbrook is not handling his first round loss to the Blazers well, today choosing to take shots at the media for daring to discuss the glaring flaws in his game and general approach.

This is precisely the lack of self-awareness which is holding Oklahoma City back.

How are the Thunder meant to get over the hump if Westbrook isn’t aware of the obvious ways he’s hurting his team?

Apparently, these shortcomings are everyone else’s fault.

That attitude might also have spread to his co-star Paul George, who instead of taking the series loss on the chin and vowing to get better, described Lillard’s game-winner as a “bad shot”.

OKC are now in a position where both of their superstar leaders are refusing to take responsibility for the team’s shortcomings and acknowledge where things went wrong.

And until that changes, this team isn’t going anywhere.

Klay Thompson admits he was looking ahead to Round 2 against the Rockets a little too soon.

The Kings and the NBA have officially launched their joint investigation into the sexual assault allegations made against Luke Walton.

Magic Johnson has a cryptic tweet for you to speculate over.

The Bucks have suffered a blow before their second round series against the Celtics even begins, losing Malcom Brogdon for at least the first two games.

Doc Rivers had some very high praise for Lou Williams after the Clippers beat the Warriors at Oracle for the second time in the series.

The Rockets are flying to Oakland before the Warriors have actually got past the Clippers.

Related Article:  Celtics Might Have Increased Their Lead On Lakers In Race For Anthony Davis
-->