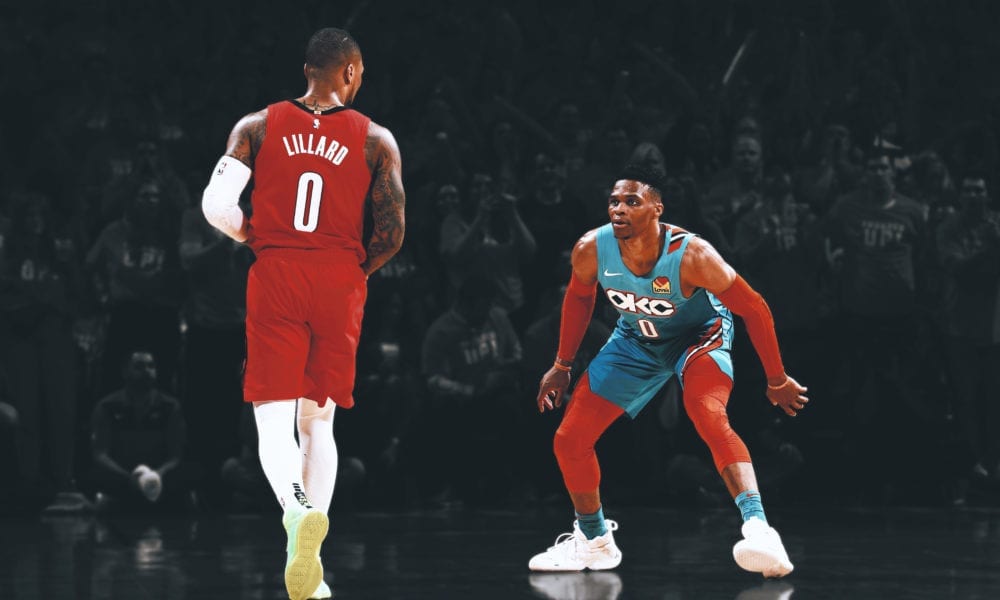 When Damian Lillard stepped to the free throw line during a late January game against the Thunder, Russell Westbrook had something to say.

“I’ve been busting that ass for years,” he yelled.

If those weren’t the words that gave birth to the Dame-Russ rivalry, they certainly cemented it.

Ever since, match-ups between the two have been highly intense, rife with shit talking and littered with daring one-on-one plays.

That intensity has only risen in the playoffs, resulting in the most entertaining and captivating storyline this young postseason has produced so far.

Things are getting physical between Dame and Russ pic.twitter.com/KAZhU9Wbbp

There was a time when Lillard was widely criticised for his defensive effort.

But you never would’ve guessed judging by this play.

Dame cut off Westbrook’s attempted drive before suffocating him in the corner and shoving him onto his back (perhaps a little too much effort from Lillard at the end there).

Dame’s contempt for Russ is hilarious.

Damian Lillard is an excellent shooter.

Russell Westbrook is not.

Rarely has that been more evident than on this play.

Westbrook’s completely and utterly fed up with Lillard’s antics in this series pic.twitter.com/UVQfiyrU1F

Few moves are as emphatic as chasedowns.

And Russ swatted this one away like it was one of Berry Tramel’s questions.

We need mics on Russ and Dame for this battle pic.twitter.com/oDIsKSttvv

There are three things that really kill the chances of any given shot going in:

All three of those boxes had been ticked on this occasion and Russ’ shot over Lillard went in anyway.

Related Article:  Steve Kerr Calls Out Russell Westbrook For Being An Asshat In The Media

To truly appreciate the beauty of the moment, first consider everything that led to it.

It began with Dame directing all sorts of unsavoury language towards Russ as he jogged back on defence.

That was followed by Russ driving right into Dame, before leaping into the air and whipping a woeful pass right between Steven Adams’ legs.

OKC somehow held onto the ball, which found its way back to Westbrook on the perimeter, allowing him to stick that outrageous three and let Lillard know all about it.

Russ rocked the baby on Dame after scoring on him 🍿 pic.twitter.com/4YJJeFExMX

Patrick Beverly knows all about Westbrook’s rock-a-baby celebration, and Russ has insisted that Lillard becomes familiar with it too.

“…I thought it was funny he waited so late in the game to do it….”

The best part of this was not Lillard’s response to Westbrook’s taunt, it was his thoughts on Dennis Schroder which came immediate afterwards.

Dame doesn’t just want to destroy Russ, he wants to crush his understudy too.

Russ stares down the Portland bench after pulling up in front of Dame pic.twitter.com/SryzDDguDt

It’s fairly safe to assume Westbrook’s two favourite places to hit shots right now are in Lillard’s face and in front of the Blazers’ bench.

On this play he killed two birds with one stone.

Unfortunately for Russ, he’d only make four more field goals all game, despite his 25 attempts.

Russ’ “this is my house” moment

Russ is feelin' it 😤

Russ won the battle here, but with a Game 4 victory and a 3-1 series lead, Dame will almost certainly win the war.