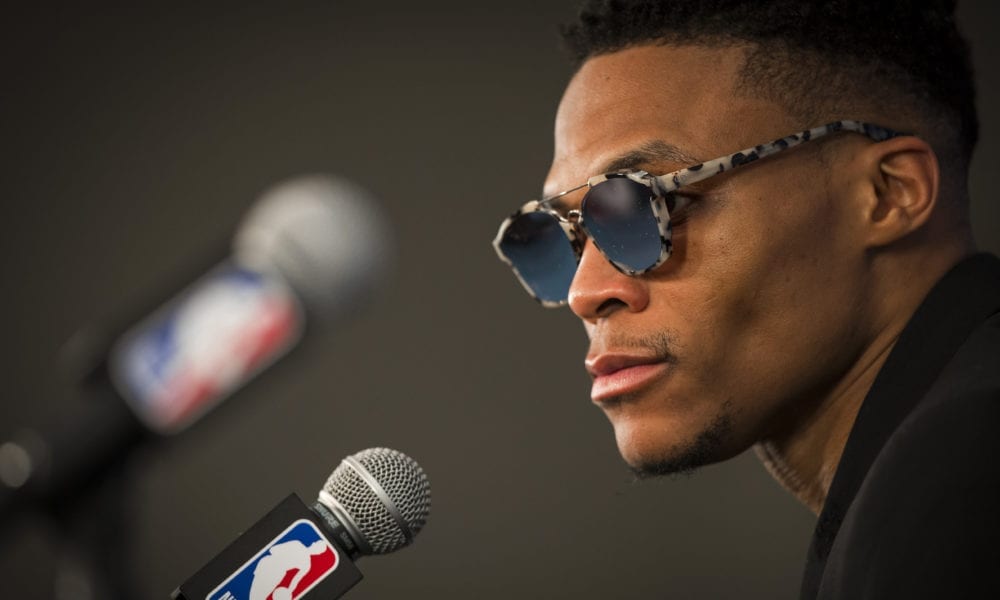 Russell Westbrook’s continued beef with a local reporter has raised both questions and eyebrows around the league.

Westbrook has refused to field questions from The Oklahoman’s Berry Tramel’s for years now, generally responding with “next question”.

Russ has long been abrasive with the press, but it’s his showdown with Tramel that has garnered national attention.

It’s been described as everything from childish to awkward to embarrassing.

Warriors coach Steve Kerr, however, has a specific concern with the whole thing.

“I just feel that we have to be very careful as a league,” Kerr told The Athletic. “We’re in a good place right now. Very popular. Fans love the game, the social dynamic, the fashion.

“But more than anything they love the connection they feel to the players. I think it’s important for the players to understand that it’s a key dynamic to this league. You’ve got to feed information to the fans.

“You don’t have to give a great answer, but it’s dangerous when you go down that path of no communication because one of the reasons people like the league right now is we have a lot of great players, really good guys who handle themselves well. So don’t kill that. You’ve got to keep that going. That’s a big part of the business.”

Charles Barkley also weighed in during Sunday’s instalment of Inside The NBA.

“First of all, that’s unprofessional,” Barkley said. “Part of our job is to talk to the press. We don’t make $30-40 million just to play basketball. People are gonna interrupt you when you have dinner.

“You have to sign autographs. You have to take pictures. Some of the other stuff is talking to the press. Russ has got to do better. Russ is a great dude.

“And just because a reporter says something bad about you, you don’t get the right to just say ‘next question’,”

That was followed by a telling story from Kenny Smith, who used his own experiences to articulate why Westbrook was in the wrong.

“Maybe six months into it, I would not talk to this guy, and then I realized I was wrong. I did realize I was wrong, in this sense: It’s his job to write his opinion.

“Because I don’t agree with his opinion doesn’t mean I don’t have the right to talk to him. I can then express my opinion, and then I can have it out.”

It remains to be seen whether Westbrook takes any of those words to heart, or simply adds Inside The NBA to his media shitlist.

Related Article:  How Much Would These Stars Be Worth In Today's NBA?