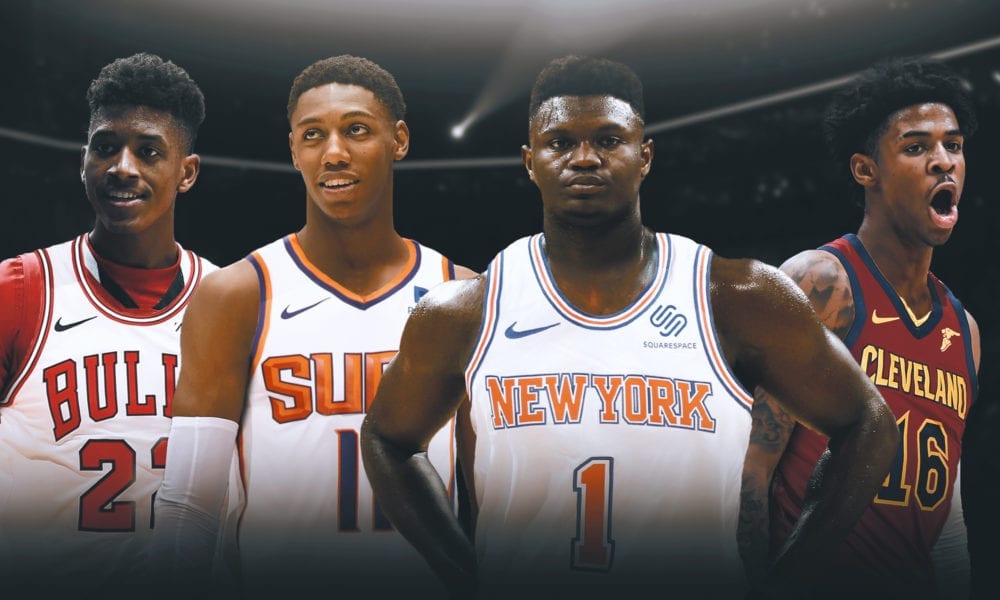 We’re right in the thick of tanking season, and what a glorious part of the NBA calendar it is.

There’s no better time to watch guys like John Jenkins and Wayne Selden Jr play 30 minutes a night before bouncing the ball off their foot or bowling over popcorn vendors with errant passes.

With Zion up for grabs at this year’s draft, there’s still plenty of tanking going on despite the league evening out the lottery odds, and no teams have tanked harder than these four.

Having sucked on an annual basis for a depressingly long time, it comes as no surprise that the Knicks have mastered the art of being inconceivably shitty.

They kicked things off by trading their franchise player for cap space.

They also rid themselves of their leading scorer, Tim Hardaway Jr, in the same trade.

Dennis Smith Jr, the only potentially meaningful piece they received in the Porzingis trade, has skipped seven of the past nine games with a “sore back” (surely you can understand my scepticism with those sassy quotation marks).

In the two games he did play in that stretch, he logged just 18 and 20 minutes respectively.

The casual fan probably couldn’t pick a single one of those guys out of a lineup.

And as tanking tradition dictates, New York has really ramped things up late in the season.

They’ve won just four of their past 36 games, a horror stretch which included an 18-game losing streak.

The good news is the Knicks have all but guaranteed themselves the best possible odds of landing Zion Williamson.

The bad news is they could still end up picking as low as fifth and their odds of landing Zion are still only 14 percent.

Only Lloyd “so you’re saying there’s a chance” Christmas likes those chances.

There’s no in-between for the Cavs.

For the past decade or so, they’ve either been contending with LeBron James or tanking without him.

When LeBron left for the second time this past summer, Cavaliers owner Dan Gilbert insisted the team would still push for a playoff spot.

But Cleveland GM Koby Altman immediately pushed for veteran players like Kyle Korver and JR Smith to be removed from the rotation, according to Woj.

When then-coach Tyronn Lue refused, he was fired just six games into the season.

Despite what they said publicly, the Cavs never had any real interest in securing the eight-seed and a middling draft pick, and their roster shows it.

Things could’ve been slightly different if Kevin Love didn’t get injured four games into the season, but there’s little doubt Cleveland still would’ve been terrible and veered towards tanking anyway.

To be fair, the Cavs once again dusting off their trusty tank and ploughing it across the countryside is understandable.

The last time they did that it landed them three number one picks in four years, which opened the door to add LeBron James, Kyrie Irving and Kevin Love (not in that order) and eventually win a championship.

The most depressing part of this awful Suns season is that they were never really trying to tank.

They’re just really, really bad (I just had to force them onto this list).

Suns management really thought their rebuild was coming to an end and it showed when they made win-now offseason moves like signing Trevor Ariza and Ryan Anderson.

But Devin Booker missed some games, they brought in a rookie head coach and DeAndre Ayton started the season as a dumpster fire on defence.

Their offence and defence have long been in the bottom two, and if you can bring yourself to actually watch a Suns game, you’ll be amazed they aren’t dead last.

Even Devin Booker averaging 52 points per game over the past week didn’t yield a single win.

This season the Bulls effectively rounded up their eight most productive players, and gradually traded or benched every single one of them.

Zach Lavine, Lauri Markkanen, Otto Porter, Kris Dunn and Wendell Carter were all in street clothes as of Monday night, while Jabari Parker, Bobby Portis, Justin Holiday were all traded.

That has left Chicago with a starting lineup of Shaquille Harrison, Timothe-Luwawu-Cabarrot, Wayne Selden, Robin Lopez and Walter Lemon Jr (yes that’s a real person, and quite frankly, Walter and I are offended you even asked).

The Bulls are sending a clear message to the rest of the league: you just brought a knife to a tank fight.