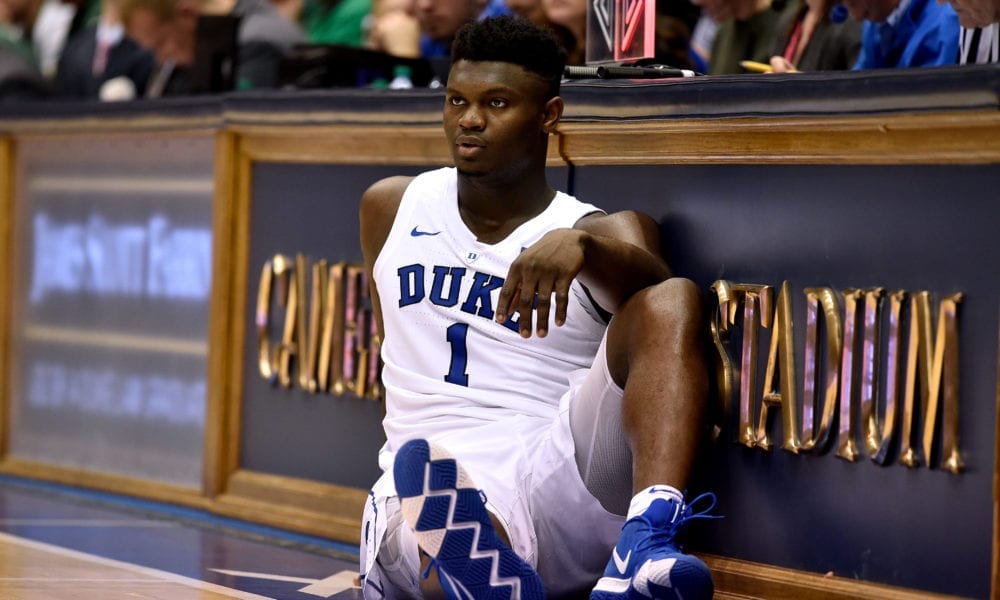 Coach K might’ve failed Zion Williamson, but one lucky shoe company is about to give him everything he wants.

Williamson’s rookie contract will be worth about $8 million in its first year, but his first shoe deal will make that look like the kind of change you find in an old pair of jeans.

Only nine players have ever landed a signature shoe in their rookie season: Hakeem, MJ, Shaq, Hill, Stackhouse, Iverson, Starbury, Lebron and Lonzo (although I’m not sure that last one really counts, especially now).

And Williamson is next in line.

According to former Nike, Adidas and Reebok marketing executive Sonny Vaccaro, the competition to land Zion is about to get wild.

“In my lifetime, I think it’s going to be the biggest bidding war ever,” he said, per ESPN’s Nick DePaula.

It remains to be seen which company comes out on top.

All we know for sure is the pressure on the winning bidder to make some seriously unbreakable shoes will be even greater than the pressure Zion applies on the shoes themselves.

Steph Curry has ranked his top 5 players of all-time and his choices are as questionable as his thoughts on the moon landing (ok, not quite).

One future NBA prospect is trying to bypass college and head straight to the league.

Devin Booker wants you to know he can do a range of things that don’t include dropping 50.

Kevin Durant, Steph Curry and Draymond Green were fined for criticising officials following Friday’s controversial loss to the Timberwolves. Here’s a breakdown of what happened and why many of the Warriors can’t stand referee Marat Kogut.

The Wizards have fired longtime team president Ernie Grunfeld, according to Marc Stein.

The Nets will soon extend head coach Kenny Atkinson after he led the team back to .500 and a likely playoff spot.

Danny Ainge’s parting gift to Dwyane Wade was a piece of the TD Garden’s parquet floor.

The consistently hilarious Channing Frye has the perfect message for his haters as he nears retirement.