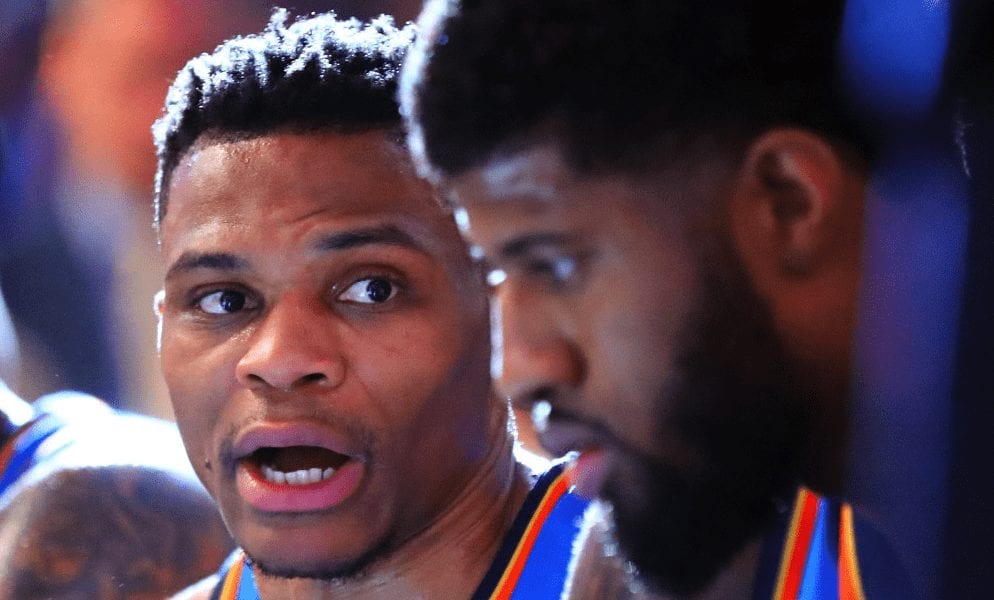 Not long ago, life was good in Oklahoma City.

Paul George was playing like a genuine MVP candidate, Russell Westbrook was surprisingly willing to defer at times and OKC was cruising at 37-20, the third-best record in the West at the time.

But a lot has changed since then.

The Thunder are 5-10 over their past 15 games and have endured the worst post All-Star run of any team not named the Lakers, Knicks, Pelicans or Mavs.

A lot of the team’s struggles come back to Paul George.

Before his shoulder started visibly bothering him in late February, George was averaging 28.9 points, 8 rebounds, 4.2 assists and 2.3 steals – all of which were career highs – on 45.5% field goal shooting and 40.5% from three.

Over his past 12 games, his scoring has dropped to 22.4 points per game on truly abysmal 37% field goal shooting.

PG’s shoulder clearly isn’t right and his struggles are far-reaching.

For starters, Westbrook suddenly feels like he needs to do more and OKC don’t have anyone to make up for George’s diminished production from outside the arc.

The Thunder have plenty of other offensive problems too.

They have the second worst offence in the league in that span, coming in just ahead of the Knicks, who can’t be more than a few days away from pulling fans out of the stands and thrusting them into the starting lineup.

The Thunder have at least maintained a top 10 defence in recent times, but it no longer comes with the same bite as a Canadian winter.

To make matters worse, OKC are rapidly running out of time to turn things around.

They have just eight regular season games remaining and every one of them is crucial, especially considering just one game separates fifth through eighth in the West.

That’s the difference between playing the Blazers in the first round and copping the Warriors first up.

And while the Thunder looked like the most dangerous threat to Golden State earlier in the season, right now they’d be nothing but a first-round appetiser for the Warriors.

Repeating last year’s unceremonious first round exit would be disastrous for a team which has yet to truly rebound from Kevin Durant’s departure, and one which looked to be among the best in the West just a few short weeks ago.