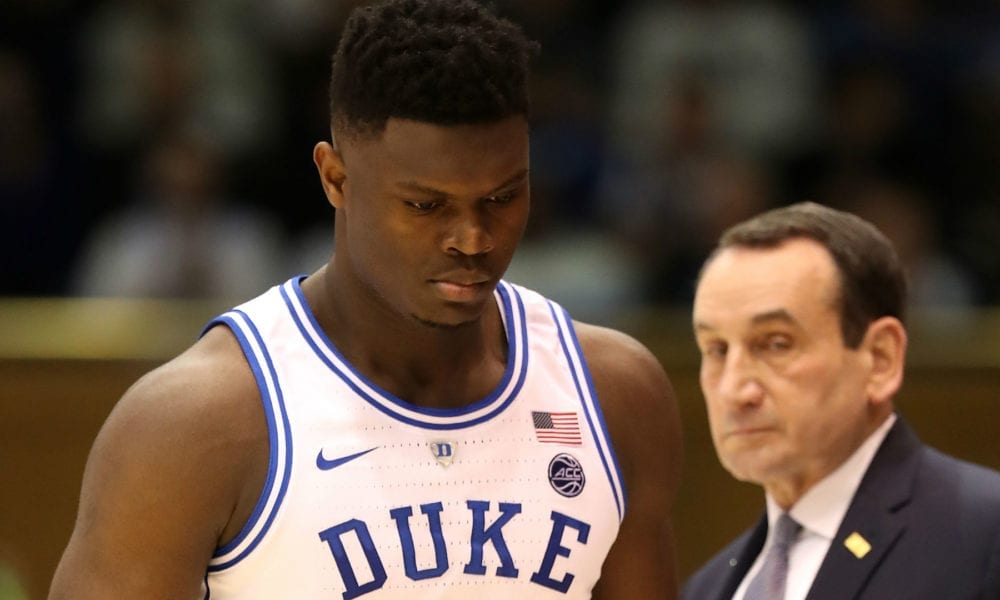 Zion Williamson has missed three straight games for Duke and coach Mike Krzyzewski says “we can’t and we won’t” allow the freshman star to play again until he’s fully recovered.

Williamson injured his right knee when his shoe ripped open on the first possession of Duke’s loss to North Carolina a fortnight ago.

But it won’t be too much longer until Williamson – the Blue Devils’ leader in rebounds, blocks and steals – returns to the court.

“There aren’t people like him athletically,” Krzyzewski said, per ESPN.

“His body has always responded instinctively to what his mind and heart feel.”

Williamson is reportedly “is moving around”, but is yet to go through any contact drills, a requirement before returning to the court.

“He’s moving really well, but contact makes you do things that you don’t think about,” Krzyzewski said.

While Coach K said Williamson wasn’t close to playing in Saturday’s 87-57 win over Miami, he has since entered the last phase of his recovery, meaning he could return as early as this week.

The average recovery time for a grade one knee sprain is about two weeks, so Williamson is more or less on schedule.

If he doesn’t play on Tuesday, he’ll still be a chance to suit up in the rematch against North Carolina on Saturday.

Whenever it is that Williamson returns to the court, let’s just hope that he’s wearing a sturdier pair of kicks.