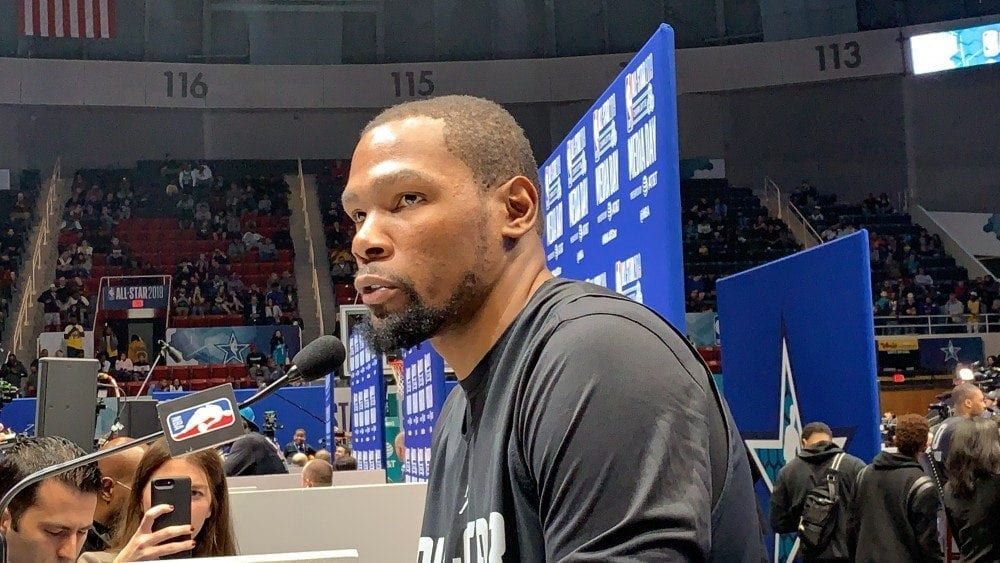 All-Star Weekend is sometimes more interesting for its Media Day than the actual game itself.

First there was Anthony Davis’s admission that the Celtics are indeed on his list of trade destinations, and then Kevin Durant opened up about his relationship with Russell Westbrook.

The discussion of the ‘feud’ between Durant and Westbrook is still going on in the media, but hopefully not for much longer after Durant’s latest comments.

KD took the opportunity to finally put to bed the narrative that he didn’t want to play with Russ at OKC.

“Russell is a player that requires so much attention out there on the court that any player would want to play with that,” Durant said.

He’s right – the only thing that draws more attention than Westbrook is the Warriors starting line-up with four other All-Stars.

“He [Westbrook] brings intensity and passion that is very rare in our sport. But with me leaving being such a huge deal to so many people who follow the game, it went along with this narrative that nobody likes him or nobody wants to be around him because of me.”

“That was always unfair to me and I always thought that was pretty ignorant. I’m glad he’s out there playing well.”

There you have it. While I’m not completely convinced that there isn’t still some animosity between the two for the way Durant left, I’m sure ready to move on from that old story.

With Russ about to average a triple-double for the third season in a row, it’s safe to say that he’s moved on too.

And now it seems that Durant is ready to move on from Golden State and establish his own legacy.

Much has been made of the fact that KD craves being considered among the GOAT conversation and that he’ll have to win with a struggling franchise to do so.

There’s no team struggling more than the Knicks, who are currently dead last in the Eastern Conference.

After clearing up his history with Westbrook, Durant addressed the rumours linking him to New York, as well as the Porzingis trade that many saw as a sign of the Knicks preparing for him.

The trade opened up two max-contract spots for the Knicks, leading media commentators to believe that those slots could be filled by Kevin Durant and a friend, possibly Kyrie Irving or Anthony Davis.

But Durant wasn’t having any part it.

“I play basketball for the Warriors,” Durant said. “My main concern is being the best basketball player I can be. I have no concerns about trades or transactions throughout the season with other teams.”

“It has nothing to do with me. I’m glad Porzingis is in a better spot, I look forward to Luka [Doncic] and him playing together for years to come.”

How democratic. Maybe KD is prepping for a career in politics after he’s done in the NBA?

Though Durant has gotten furious with the media speculation on numerous occasions, he’s still refused to commit to returning the Warriors.

While Klay Thomson has openly said he hopes to retire a Warrior, Durant is definitely not on the same page.

“That’s on them,” Durant said when asked why fans think that he’s leaving. “I’ll figure it out once we get to that point.”