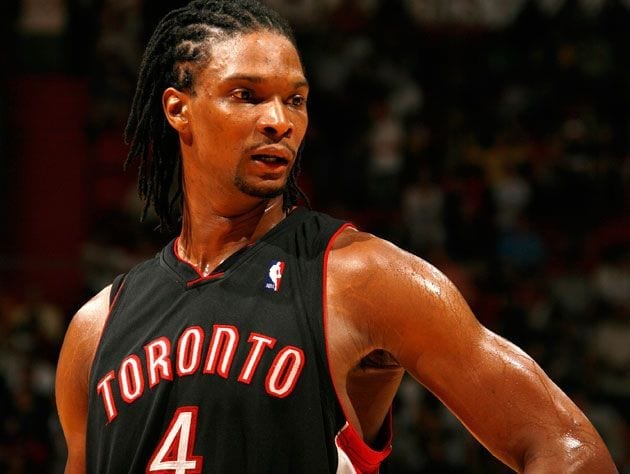 Chris Bosh understands the much-talked about Anthony Davis predicament better than most.

He’s been in the same position, the disgruntled star stuck on a perennial underperformer.

And almost nine-years after Bosh left the Raptors, the two-time NBA champion has opened up on the moment he knew things weren’t going to work out in Toronto.

While it might seem like a random moment, it perfectly summed up Bosh’s ongoing frustrations north of the border.

“I remember John Salmons was a free agent and it was between us and Chicago,” Bosh said on The Bill Simmons Podcast. “So I’m like, ‘Yeah, OK. Oh man, if we can get Johnny Salmons we’ll be pretty good.’ And I guess you would call it recruiting, trying to get in touch with him and stuff, and he took less money to go to Chicago. And that’s kind of when I knew it was going to be a lot more difficult being in Toronto. So as soon as I could change my destiny and have an opportunity to explore other things, I was ready to do that.”

Bosh also revealed why he felt the team struggled to attract elite talent, pointing to a range of difficulties the team was facing.

“It was just that consistency of just kind of underachieving a little bit and really, quite frankly, not having any help,” Bosh said. “Free agents didn’t want to come…I guess it just wasn’t as appealing. And even now, I don’t remember the last time Toronto got a big free agent signing, it’s usually been smart trades.”

But it wasn’t just the on-court stuff that haunted the Raptors.

There was also plenty going on behind the scenes which limited their ability to attract big name players.

“It’s taxes and customs, and they don’t make it easy on you,” Bosh explained. “…We’d go in and out of the city a lot…You’re going through customs every time…We had to take off our shoes and laptops, and you now, we’re NBA players — we’ve got a lot of jewellery on. We’ve got a lot of stuff…I did the math one time: 26 hours in the airport. Over a season, 26 extra hours.”

Living in Canada certainly isn’t as glamorous as New York or LA.

But the Raptors have made themselves a much more valuable destination just by climbing towards the top of the Eastern Conference.

They’re yet to sign a major free agent, but there’s no doubt that through sheer success, they’re beginning to change the narrative surrounding the organisation.

It’s just a shame they weren’t able to do that while Bosh was in town.