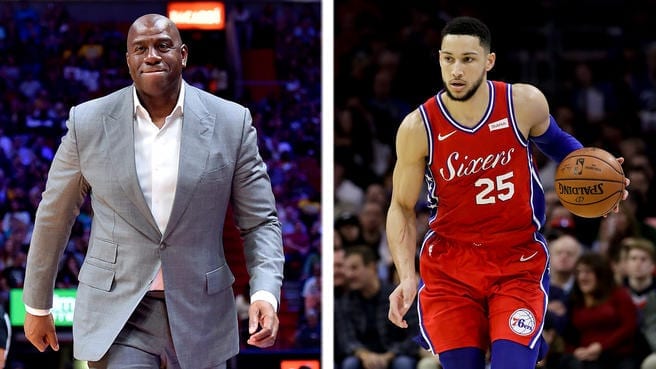 76ers general manager Elton Brand has called Magic Johnson to apologise for insinuating the Lakers requested permission — unprompted — for Ben Simmons to speak with the Hall of Famer, according to ESPN.

Brand’s apology came after he told a local Philadelphia radio station he had refused the Lakers’ advances.

Speaking to 97.5 The Fanatic on Monday, Brand said, “[Lakers GM] Rob Pelinka called me and said that Ben wanted to talk to Hall of Famers after the season; Magic was on the list. He asked for authorization … I said no.”

But he failed to mention that a Sixers staffer, at the request of Simmons’ camp, had contacted Pelinka in the first place.

Considering Johnson had already found himself in hater water due to tampering allegations on multiple occasions before, Brand’s comments were particularly problematic for the Lakers.

The NBA later issued a statement on Tuesday clearing Johnson.

While Magic didn’t actually do anything wrong, he could’ve avoided this fallout just by biting his tongue.

Instead, he told the world about the Simmons exchange – which took place a month ago –  before the Lakers’ game in Philadelphia on Sunday.