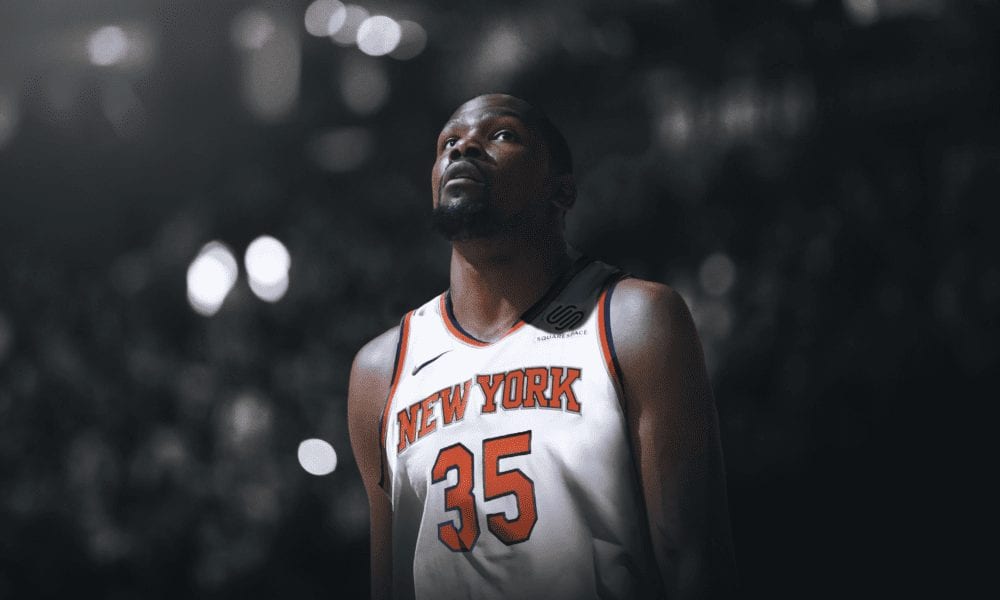 For NBA enthusiasts, these are wild times.

The intrigue surrounding Durant, in particular, is immense.

KD has long been heavily rumoured to leave Golden State for New York, and there are plenty of signs suggesting he’ll do exactly that.

For your convenience, we’ve compiled every single one of them.

Knicks general manager Scott Perry was part of the Seattle front office team that drafted Durant in 2007, and Perry and KD have maintained a good relationship to this day, according to The Athletic’s Sam Amick.

Kleiman is a New Yorker and a lifelong Knicks fan who reportedly holds dreams of working with the team one day.

He also tweeted this last year:

Imma run the Knicks one day

You don’t trade the Zinger for cap space unless you know you’re getting one, if not two, superstars in the offseason.

Then again, they are the Knicks.

In a pitch designed to encourage their season ticket holders to renew for next year, the Knicks thought this photo, of all photos, was best one to hype up the team for 2019-20.

We were just one game into the season when Durant’s brother, Tony, left a comment on one of KD’s Instagram posts which raised a lot of questions.

Following Golden State’s opening night win over Oklahoma City, he commented: “Yessir brother!!!! Filling the hand up before we get outta here!”

The lesser known Durant later said his “before we get outta here” remark was referring to retirement, before telling everyone to “stop reaching”.

Considering Durant had only just celebrated his 30th birthday, it certainly felt like no one was reaching more than ol’ Tony.

Thinly veiled jabs are commonplace in the NBA, but few would expect to see any at a championship parade.

And yet that’s exactly what we got when Warriors president of basketball operations Bob Myers roasted Durant during the team’s title celebrations last year.

The first notable quote of the parade: Bob Myers with an unexpected zing at at Kevin Durant pic.twitter.com/asE6MpsgN5

Then Warriors announcer Bob Fitzgerald got in on the act.

All this was rather strange, especially for an occasion which traditionally features nothing but love.

The genuine awkwardness in the air suggested this was more than just a bit of light ribbing.

Draymond Green ripping into Durant about his free agency plans

While everyone has been feverishly speculating about Durant’s future for months, we never really knew how much this was weighing on his teammates’ minds.

But that changed when all hell broke loose in mid-November as Durant got into a shouting match with Draymond Green, who repeatedly called KD a “bitch” and questioned his loyalty to the team.

Kevin Durant & Draymond Green get into a heated exchange after Draymond failed to get a shot off at the end of regulation during the Warriors loss to the Clippers. pic.twitter.com/uYROz4bld1

Green’s actions not only revealed that he was genuinely concerned about Durant’s impending free agency, but also suggested it had become a sore spot within the Warriors locker room.

A long list of credible reporters either believe it’s a done deal, or highly likely

Allow me to provide a few rapid-fire examples:

The Athletic’s Ethan Strauss has reported, much to Durant’s annoyance, that “insiders around the league think Kevin Durant is leaving the Warriors for the Knicks.”

The New York Times’ Marc Stein wrote, “The threat of the Knicks persuading Durant to leave one of the most dominant teams in league history has never felt more real to the Warriors themselves.”

If you’re not convinced now, you probably never will be.