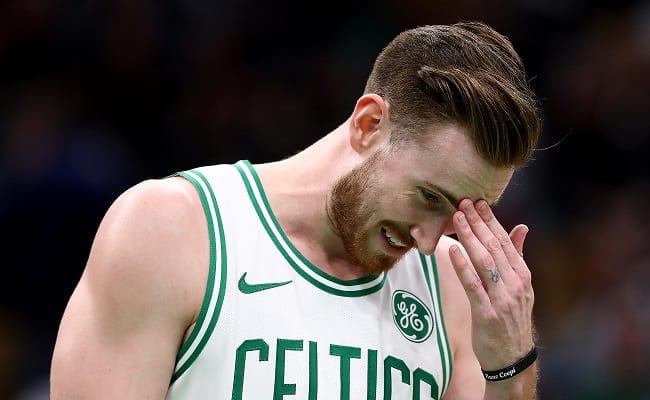 When the Boston Celtics signed Gordon Hayward the summer before last, it was meant to be a game-changing move which positioned the team to compete with the loaded Golden State Warriors.

But that hasn’t eventuated.

Boston is currently fifth in the East and Hayward is averaging just 10.8 points per game, less than half of what he managed during his final year in Utah.

When the Warriors beat the Celtics in Boston on Saturday night, he didn’t even look like he belonged on the floor.

That version of Hayward is definitely not striking fear into anyone on the Dubs.

How do we know for sure?

Well, after Hayward’s poor showing against Golden State on Saturday, one Warriors player told Stadium’s Jeff Goodman that Hayward was a straight-up “liability”.

“I talked to a Warriors player who told me, ‘listen, Gordon Hayward is not Gordon Hayward right now,’” Goodman said on CLNS Media Network’s Garden Report.

“‘He’s hurting them.’ The anonymous player continued. ‘He’s a liability on both ends of the court.’”

Hayward’s play has improved slightly since being moved to the bench earlier in the season, but he has a long way to go, with his good nights far too rare and his disappearing acts far too common.

Related Article:  What Should The Celtics Do About Gordon Hayward?
-->