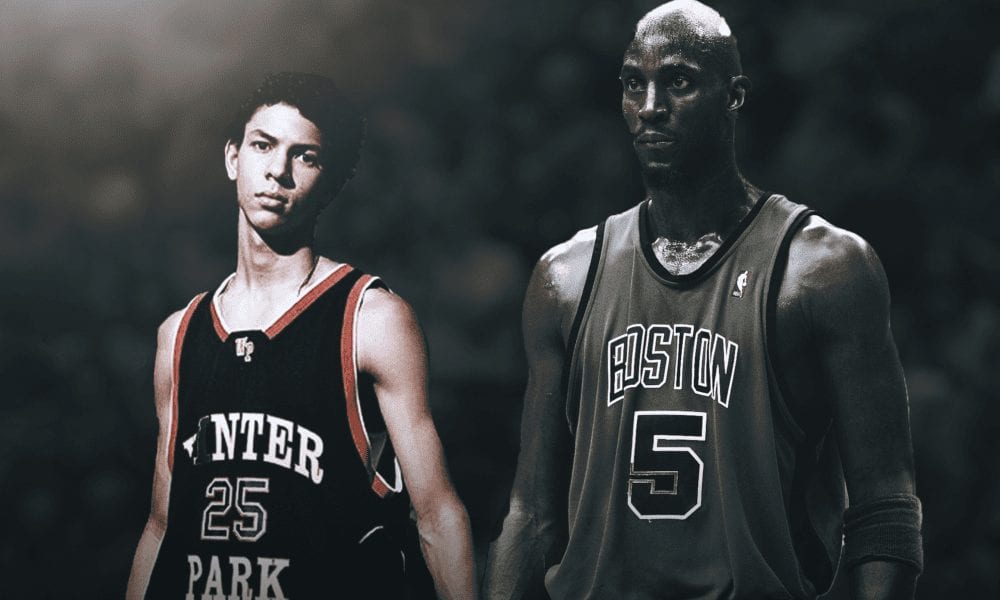 Few high school players have ever been cockier than a young Austin Rivers.

Dude had confidence oozing out of his pores, as Kevin Garnett found out in Boston when a teenaged Rivers showed up at Celtics practice and challenged him to a game of 1-on-1.

Rivers had just got the better of Kendrick Perkins, before handing down the challenge to KG.

He rolled the ball to Garnett, who stood there in disbelief with the Spalding bouncing off his toes.

“I said ‘I know your dad’s the coach so I gotta be real careful’,” Garnett recalled on the Chris Vernon Show.

“My shoes was untied and he shot the first one and missed it…matter of fact he dunked it…I said ‘hold on’ and I tied my shoes and heard PJ (PJ Brown) and TA (Tony Allen) say ‘yeah tie them shoes killa!’”

From there it was all over for Rivers.

He didn’t score score another point, but he did earn KG’s respect.

“He threw the ball…His dad threw him out. ‘Get out. Go work on your game, that’s why got mopped up’…That’s when I knew right there Austin Rivers gonna be in our league in about two years.”

Kevin Garnett and TA tell the story of Austin Rivers as a junior in HS showin up to a Celtics practice and challenging KG to a game of One-on-one.

Rivers’s NBA production has never matched the hype from his high school days, but he’s a solid defender who has carved out a meaningful role for himself in Houston.

His story has been one of staying power rather than superstardom.

It hasn’t been an easy ride thanks to a rocky adjustment to the pros in New Orleans coupled with constant criticism and cries of nepotism in LA.

But it might just have been the dogged self-belief that KG saw all those years ago which got him through him it all.

Related Article:  Kevin Durant Says Lakers Will Be ‘Team To Be Reckoned With’ Once LeBron James Returns
-->