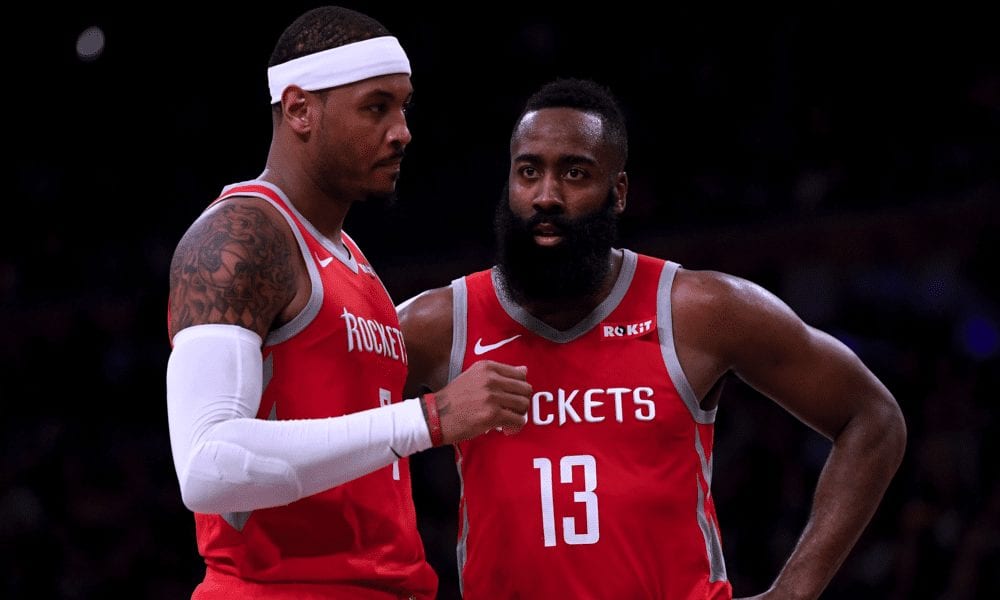 Despite Carmelo Anthony’s disastrous run in Houston, James Harden still believes Melo has something to give if he can find the right team.

Speaking to the media on Tuesday, Harden hinted that he was eager to see Melo hooping somewhere other than an empty gym.

“I just want to see him hoop, see him happy, and I mean, he deserves it, honestly,” Harden said.

“Like, he’s put so much time and effort into this game that he should be able to hoop and still have fun playing the game of basketball.”

Harden was then asked if he was disappointed with how things panned out for Anthony in Houston.

“Yeah, man. Melo is one of the best to ever hoop,” Harden said.

“He loves the game of basketball. Some guys just do it just because they’re gifted or they’re athletic or they can shoot the basketball.

“There’s not that many players that like, love to hoop. It kind of sucks that it didn’t work out. It is what it is.

“I just hope he finds somewhere where they can embrace him and he can still hoop. So he [gets to] make that decision that he’s done [playing].”

Rockets coach Mike D’Antoni had a similar response when he was asked the same question.

“Just wasn’t a good fit. And upstairs saw it and did something. He did everything possible to make it work, and it just didn’t.”

Anthony only ever played 10 games for the Rockets, averaging 13.4 points on 40 percent shooting in 29 minutes per game.

He was then traded to the Bulls on Tuesday, along with a whole heap of cash.

He isn’t expected to play a single game for Chicago and league insiders still expect him to find a new home before the February 7 trade deadline, according to The Athletic.

Stay tuned, because this Melo saga never seems to end.