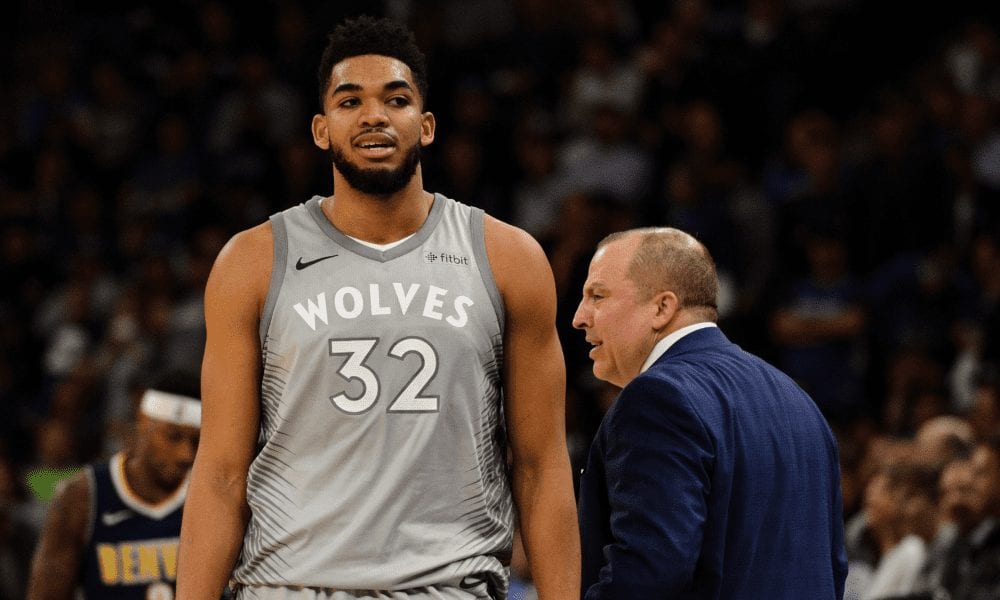 When Jimmy Butler was finally shipped out of Minnesota in November, there were those within the Timberwolves organisation who forecasted smooth sailing ahead.

There were others who knew the Butler saga was so immense that it would come with its own aftershocks.

Karl Anthony Towns fell into the former group, and just days after he told several assistant coaches the organisation had finally gained some much-needed stability, Timberwolves CEO Ethan Casson and general manager Scott Layden marched into Tom Thibodeau’s office and fired him on the spot.

It must be quite a kick in the guts to think you’ve weathered an almighty tsunami, only to be blindsided by the inevitable secondary wave.

“I jinxed that badly,” Towns said on Monday as the team gathered for its first Thibodeau-less practice, per ESPN.

“We had just celebrated a good win, so we all went home thinking the day was over.

“It was just beginning.”

While the whole team was caught off guard by the firing, Derrick Rose – who has long been close with Thibodeau – was particularly shaken.

“He was the only coach that believed in me,” Rose said.

“…No teams wasn’t looking for me at all. I was basically out the league.”

With Thibodeau gone, the question now is: when will the Wolves find any sort of stability?

The team will now be coached by 32-year-old Ryan Saunders, but even he will likely be replaced in the summer.

Then there’s Layden, the general manager who avoided being fired along with Thibodeau, who remains on shaky ground.

Perhaps Towns will be a little more reluctant to predict smooth sailing this time around.

After all, Timberwolves-related chaos often comes in waves.

Related Article:  How Robert Covington Is Trying To Get Andrew Wiggins And Karl-Anthony Towns Locked In
-->