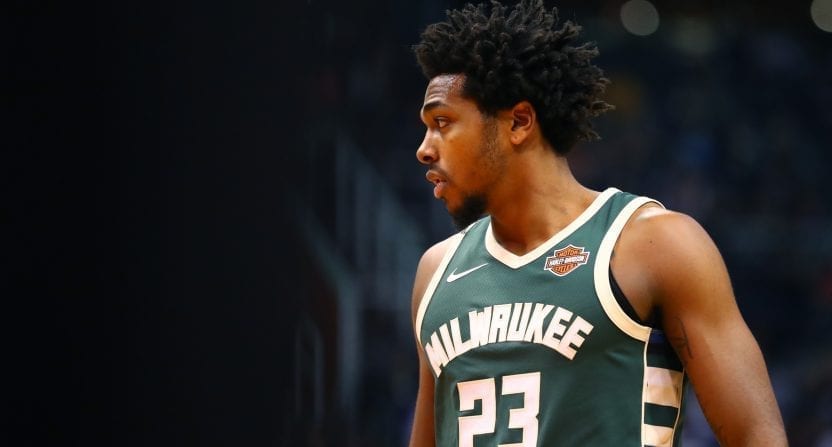 The Milwaukee Police Department has reportedly fired one of the officers involved in the controversial arrest of Milwaukee Bucks guard Sterling Brown, but the dismissal had nothing to do with his conduct that night.

The officer was let go due to violating the department’s social media policy, and was not named by police chief Alfonso Morales this week.

But it was officer Erik Andrade who was investigated by internal affairs, and who was found to have made a series of racist posts on Facebook, according to the Milwaukee Journal Sentinel.

Brown had been stopped outside a Milwaukee Walgreens for parking in a disabled space, when officers took him down because he didn’t take his hands out of his pockets immediately.

They subsequently arrested him, but video of the incident showed no aggression on Brown’s part.

Brown sued the city of Milwaukee and its police department in June, and in the lawsuit cited posts and “racist memes” that one officer shared on Facebook.

One of those appeared online while Brown was still in custody.

“Nice meeting Sterling Brown of the Milwaukee Bucks at work this morning! Lol#FearTheDeer” the post read.

During Game 1 of the NBA Finals, the same officer wrote: “I hope JR Smith double parks in Walgreens handicap Parkin spots when he’s in Milwaukee!”

And in April he posted a meme that made fun of Kevin Durant’s hair, likening it to a chocolate ice cream with chocolate sprinkles.

In the lawsuit Brown’s attorney Mark Thomsen wrote, “Andrade’s post is an admission that he and other Defendant officers are allowed to engage in unlawful attacks and arrests of African Americans without justification and then relish such events without any fear of real discipline.”

Related Article:  Everything You Need To Know About The Sterling Brown Incident
-->