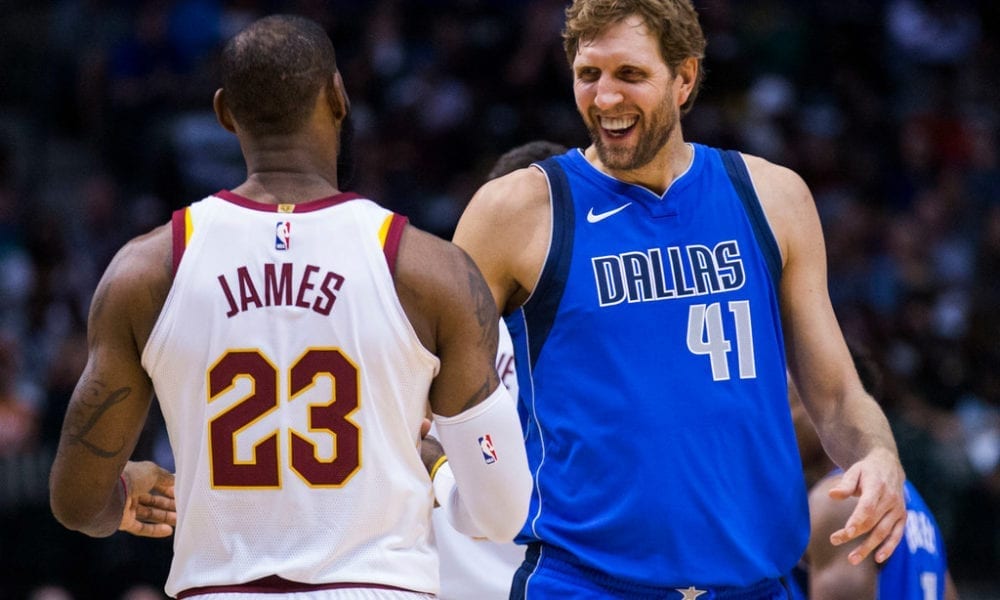 LeBron James has lavished Dirk Nowitzki with praise, saying the lifelong Maverick has always been one of his favourite players.

LeBron made the comments during his first ever trip to Berlin this week.

“He’s amazing,” James said. “One of my favourite players ever to play the game. Just his ability, what he’s able to do at his size. His ability to shoot the ball.

“His ability to sacrifice, you know, shots for other guys being a part of his team and a part of this franchise over the years and his loyalty obviously speaks volumes.

In Berlin for the first time, @KingJames talks about the talent on display and gives praise to @swish41!

“He’s a true professional. He’s a guy who continues to get better every year and also when he slowed down just a bit, he expanded on other parts of his game to still make him efficient and still make him effective out on the floor.”

James also discussed Dirk becoming an iconic figure within the game, and one which many have since attempted to emulate.

“Anytime you lift one leg and shoot it, everyone took that from Dirk,” he said. “It’s not a big piece of my arsenal, but I go to it every now and then. It’s just a shot that can’t be guarded obviously.

“You guys have seen it over the years with Dirk, you can’t contest it, you can’t guard it. It helps the fact that he’s 7-foot-2 when he’s shooting that shot too.”

If anyone has witnessed Dirk at his best, it’s LeBron.

Nowitzki produced some of his finest basketball to shock James’ Miami Heat in the 2011 NBA Finals, averaging 26 points, 9.7 rebounds across the series to claim the title.