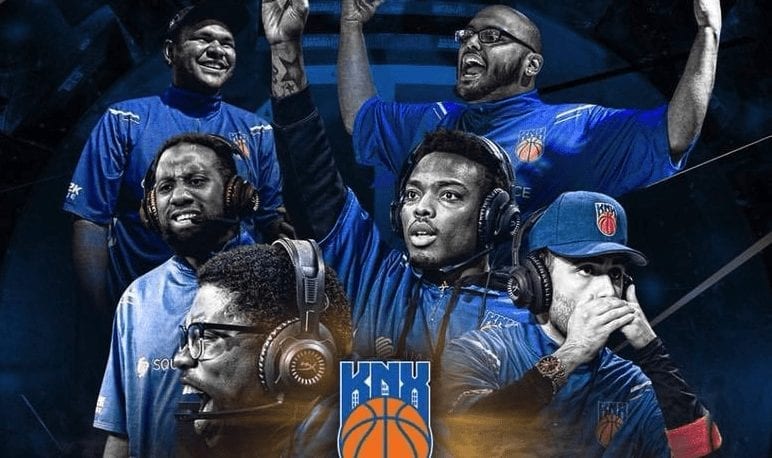 The Cinderella story isn’t always for the fantasy movies or children books. Sometimes, it happens in real life and sometimes it happens to you.

And on Saturday night, the glass slipper fit just perfectly for Knicks Gaming.

The first two rounds of the inaugural NBA 2K League playoffs took place last weekend in New York. With the first round being single elimination, powerhouse teams like the Blazers and Pistons found themselves heading home after just one game.

The second round was a best of three series and took place on Saturday. After shocking the world with their upset of the Blazers, Knicks Gaming would beat the Cavs in three games to advance to the Finals. On the other side, it was Hotshot leading the way as Heat Check Gaming provided an upset of their own over Philadelphia.

The stage was set. Knicks vs. Heat in a best of three game series for the championship on August 25.

Saturday came and the studio in New York City was set for a whole new experience. From adding more studio lights in the building to the placement of the shiny championship trophy in the middle of the stage, the atmosphere was completely different than a normal week.

Media from around the world made their way to the studio in NYC to cover the event. Even players from other teams in the league flew to New York to watch some of their peers compete for the title. As for the fans, it was standing room only as every seat and crevice was occupied.

For Miami, it was a roller coaster of a season that came down to the last weekend of the regular season to determine their playoff fate. After a mid-season patch that pushed their best player, Hotshot, to more of a playmaking wing, Miami found their answer moving forward.

Squeaking into the playoffs as the six seed, Miami rode the hot hand of Hotshot through the first two rounds. After 97 total points by Hotshot in both of the second round victories, the stage was set for him to push Heat Check Gaming to a championship.

This was their opportunity and they made the best of it. They rallied and pulled off numerous upsets in a road that eventually led to them winning The Ticket. They had their automatic bid to the playoffs.

Over the next four weeks, Knicks Gaming would finish with a 5-9 regular season record and enter the playoffs as the eight seed. They would face the 11-2 Blazers in the first round who just happened to have the MVP and DPOY in OneWildWalnut.

As mentioned earlier, they would shock the world and advance through both of the first two rounds. They were the definition of a Cinderella story.

Game one of the finals didn’t disappoint.

After the nerves settled, Knicks Gaming fed off the home crowd as they got out to a 17-10 first quarter lead. The Knicks stuck to their game plan of spreading the ball around and it resulted in multiple three pointers. New York would go 6/9 from behind the arc in the first half and take a 10-point lead into the second half.

The Knicks continued their run in the second half by outscoring the Heat again in the third quarter by two points. This would set the stage for a fourth quarter that could take one of two turns. Would New York open the game up or could Miami turn things around?

Behind Hotshot’s playmaking, the game would turn in Heat Check Gaming’s favor. They made their run and cut the game to three points with under a minute to play. After a block and a costly turnover, Miami’s comeback would fall just short.

In the valiant comeback, Hotshot finished with 44 points and seven rebounds on 20/25 shooting. For the Knicks, it was their point guard in IamAdamthe1st with 34 points and eight assists while Goofy and Idris combined for 22 points.

With the Knicks taking game one, now all they needed was one more win.

Even though Miami lost the first game, the fourth quarter comeback seemed to spark some momentum heading into game two. Taking leads into the second quarter and second half, it looked like Heat Check Gaming had found answer around a more balanced scoring approach.

It was the fourth quarter and Heat Check Gaming was up by nine points. The finals looked to be headed to a decisive game three. But the Knicks had other plans. This time, it wasn’t IamAdamthe1st leading the way for the Knicks.

NateKahl came through with some lockdown defense on Hotshot and a couple of timely three pointers while Goofy controlled the glass. On one occasion, late in the fourth quarter, Goofy brought down three consecutive offensive rebounds that eventually led to a Knicks Gaming three pointer. Describing the crowd as going crazy would be an understatement.

The Cinderella story was complete when the Knicks completed the fourth quarter comeback and stole game two. Knicks Gaming shocked the world once again and this time, it resulted in the inaugural NBA 2K League championship trophy.

The finals MVP award was awarded to NateKahl for his defense on Hotshot and his clutch three pointers. He finished the game with 12 points.

For Heat Check Gaming, Hotshot finished with 38 points and 11 assists while Jalen and Majes7ic combined for 21 points. Miami would also walk away with $100,000 for coming in second place.

As the champion of the NBA2K League, Knicks Gaming took home $300,000 as the cash prize.

It was a classic finals that should set the foundation for the second season of the league. With four more expansion teams coming and another draft in the spring, the best is yet to come for the NBA 2K League.