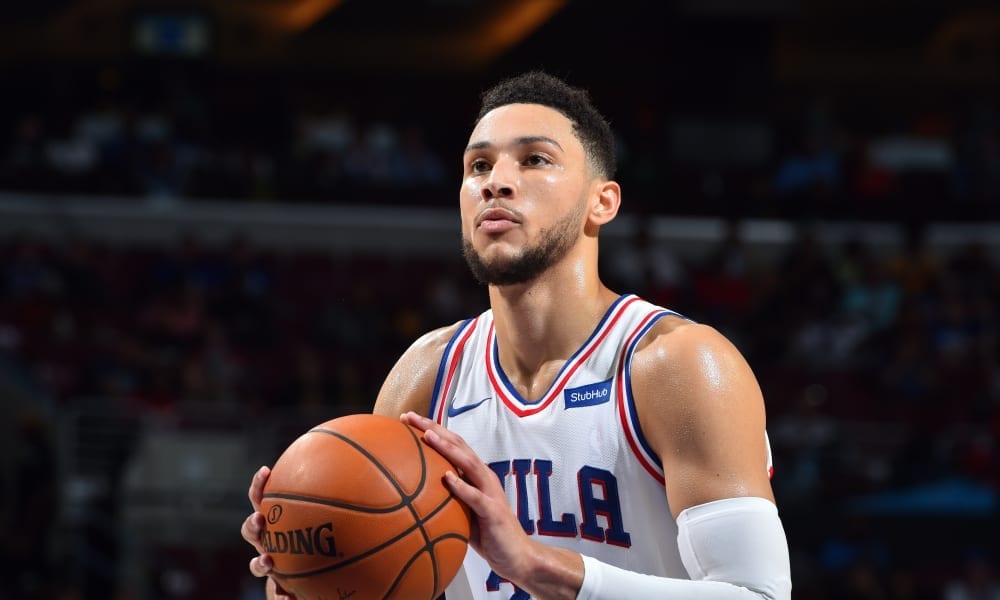 Ben Simmons’ tendency to shoot with his right hand around the basket – combined with his shooting struggles outside the paint with his preferred left-hand – has caused many to wonder whether he should become a full time ‘righty’.

The Ringer’s Kevin O’Connor has been screaming this from the rooftops for some time now and has somewhat popularised this school of thought.

The New York Times’ Marc Stein renewed the debate in his newsletter on Wednesday when he said “many expect” Simmons to make the switch to his right-hand next season.

But Simmons refuted that claim on Twitter with a single emoji.

However the former number one draft pick inadvertently rekindled the chatter back in May when he threw out the first pitch for the Phillies with his right hand.

.@BenSimmons25 tosses out first pitch @Phillies… it was a strike, of course.

Then there’s this quote from Simmons back in 2016: “I think I was supposed to be right-handed…It’s all natural now.”

And the stats also suggest something isn’t quite right.

Simmons shot 0-11 from three-point range as a rookie and managed just 27.8 percent on left-handed mid-range jumpers.

But let’s get a second opinion here.

During the playoffs, Burke told The New York Times, “I think he might be shooting righty next season,” while Rose claimed ““that’s something that has to get corrected.”

Then was also a Western Conference scout telling the aforementioned O’Connor, “He simply looks like a righty trying to shoot lefty…and he’s capable of switching.”

Even Simmons’ own teammate JJ Redick – and man who knows a thing or two about shooting – said he suggested switching hands to the talented Aussie.

“Ben is incredible because he’s literally the most receptive young player that I’ve been around,” Redick said on his podcast in April. “He seemed open to the idea. I don’t want to mess with him.”

However, Redick did add that the change might not be as needed as it once appeared to be.

“I also think since I said that to him, which was like October or November, which was the first time I saw him shoot right-handed, he’s gotten better left-handed. So I don’t know if it’s necessary.”

The problem with any proposed change, of course, is that successfully switching shooting hands doesn’t happen overnight.

It would be a long and arduous process.

It’s also a lot easier to carry on doing things how you’re doing them, rather than taking two steps back – and re-learning the basics – before taking three steps forward with proper form.

Just ask anyone who’s become a competent two-fingered typer whether they want to go back to square one and learn proper touch-typing.

While his Twitter activity suggests he’s already made up his mind, we’ll find out for sure when his 76ers open the new season in Boston on October 16.