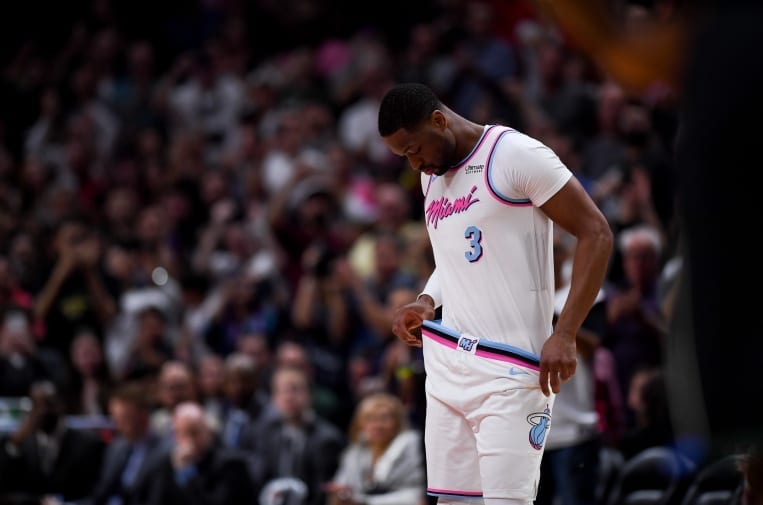 Dwyane Wade is in the midst of his most mysterious offseason yet.

And the man himself has remained coy about when he’ll make a decision.

So while we wait, we’ve broken down the pros and cons of Wade staving off retirement and playing a 16th season.

Let’s go against convention and start with the cons.

When Wade returned to Miami on February 9, he received a hero’s welcome.

You would’ve been hard pressed to find a single Heat fan still in their seat when he checked into the game.

It was among the most memorable feel-good moments in all of sports in 2018 (I’m calling it early).

No one has ever captured the attention of Miami fans like the man they call Father Prime.

.@DwyaneWade gets standing ovation in first game back with Miami #Heat and hits a three #NBA #HeatNation pic.twitter.com/EkmAlThhSk

Despite an uninspiring tenure in Cleveland to begin the season, Wade ensured the good times didn’t end with his re-introduction to the good people of Miami.

In February against the 76ers, he scored 15 in the 4th quarter and topped it off with the game-winner.

When the Heat met the Sixers again in the first round of the playoffs, he was clearly the best player on the floor in Game 2 as he led his beloved squad to the win with 28 points , 7 rebounds, 3 rebounds and 2 steals on 11-16 shooting.

Tonight, he hit the game winner with his name on his shoes. pic.twitter.com/H38Xv7b512

These were moments that reminded us Wade’s return home had morphed into exactly what we all hoped it would be.

And they might also represent his best chance to go out on a high.

It hasn’t been the healthiest of careers for Wade.

These problems and more have combined to rule him out of 268 regular season games over his career (that’s 3.26 full seasons).

Playing 67 games last season was actually a pretty good outcome by his standards, but it’d take a brave man to bet on that sort of good fortune continuing next year.

While you could argue the flashes Wade showed last season were a good reason to call it a wrap and end on a high, for the sake of playing devil’s advocate, perhaps it’s also a sign that there’s every reason to carry on.

He also passed Larry Bird for the #10 spot on the all-time playoff scoring list.
pic.twitter.com/GId96NyKXN

At 36-years-of-age, it was quite incredible that Wade’s return to Miami was fun for more reasons than the initial shot of nostalgia.

Isn’t it amazing what happens when you get in great shape?

If there’s any team that can keep Wade playing at a high level, it’s Miami

It’s no coincidence Wade looked much better in Miami than Cleveland last season.

The Heat have instilled a notoriously strict fitness culture which has permeated throughout the organisation.

Multiple players and staff have spoken about the brutal nature of the team’s workouts, with the organisation even keeping tabs on its players’ body fat percentages.

For a player like Wade, who hasn’t always been in the best shape lately, this can be the difference between looking completely washed and being able to conjure up moments of that old magic.

Even if Wade diminishes further next season and is an absolute shell of his former self, his legacy is set in stone.

Going out on a high is always ideal, but he doesn’t have much to worry about ruining anything.

While everyone views this differently, it’s fairly safe to say that once a player reaches a certain level of success with one team, there’s little they can do later in their career to erase their fans’ memories of their glory years.

Even Vince Carter can attest to that…Dude is about to play his fifth season below 10 points per game, but ultimately few will remember anything other than those incredible years in Toronto.

Miami will love you either way.