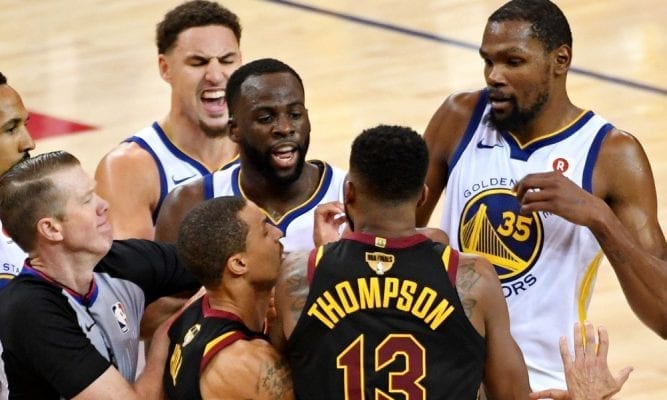 Tristan Thompson and Draymond Green had to be separated when ongoing tensions between the two turned physical at a LeBron James-hosted ESPYs after-party.

The explosive development was first reported by Bossip and later confirmed by The Athletic’s Michael Thompson, who had this to say:

Both Green and Thompson were guests of LeBron for this ultra-exclusive affair—which prohibited phones and cameras. None of the attendees expected the on-the-court drama to flare back up in this setting.

Which is why everyone was stunned when Thompson, according to sources, out of nowhere attacked Green. No argument. No squaring up. No taking it outside.

“It was a sucker punch,” said one source who attended the party.

Other sources were quoted saying Thompson’s attack was everything from a “face mush” to a “legit punch”.

Related Article:  Harrison Barnes Describes The Struggle That Was Moving From Golden State To Dallas

The friction which fuelled the incident dates all the way back to the NBA Finals, with Thomson and Green indulging in a Game 1 scuffle following Thompson’s ejection.

Throughly unimpressed with a series of taunts from Green, Thompson shoved the ball into his face and gestured to step outside.

When the series concluded following Game 4, Thompson went to shake Green’s hand but the Warriors forward refused, later boasting to the media that he told Thompson, “We ain’t cut from the same cloth.”

And yet despite all their previous bickering and accompanying push-and-shove, the beef was quashed by the end of ESPYs night, according to The Athletic, allowing everyone to proceed like adults and enjoy their night.