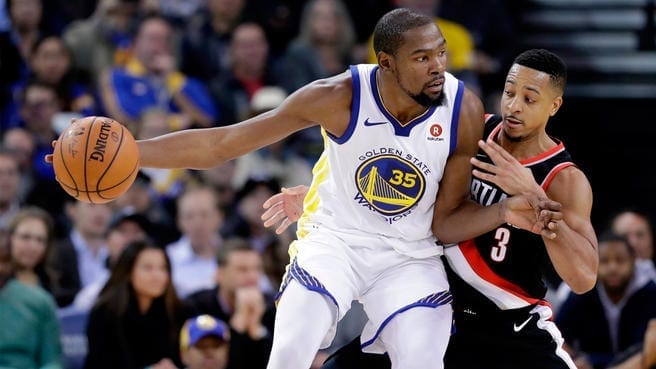 If you had two NBA championships and hundreds of millions of dollars, what would you do with your downtime?

Travel the world? Chill on a tropical island? How about beef with everyone on social media including teenaged Instagrammers?

That’s certainly been Kevin Durant’s preference for a while now, his latest exploits being a public back-and-forth with CJ McCollum.

The whole thing started this week when Durant essentially mocked and laughed at McCollum on his own podcast, albeit in a seemingly good-natured manner.

Here’s what was said after McCollum expressed his displeasure with Golden State signing DeMarcus Cousins.

Durant: “Why are you mad about this stuff?”

McCollum: “Bro, I’m in the league. What do you mean why am I mad about this stuff? I’m in the Western Conference. I gotta play you MFers all the time anyway as it is, over and over again. We got eliminated by y’all a few times in the first round. So I’m looking at [Cousins] —

Durant: “I mean … you know you guys aren’t going to win a championship?”

McCollum: “Bro, we have the team. We have the capabilities. Anything is possible. We can win a championship, bro.”

Durant then proceeded to remind McCollum that Portland got swept in the first-round last season.

On Wednesday night (US time) their conversation spilled over to Twitter, where it appeared to be somewhat less friendly.

I still think the b word is harsh and shouldn’t be used. . He know that decision was soft but I respect it. It’s like getting jumped with ur brothers by a gang you should’ve beat then joining the gang that jumped u and ur brothers 2 months later & forgetting about your bros https://t.co/BFGqQy1lwR

So,I would get into a gang fight, lose, plot on my brother for 2 months in our home and then go get the gang we lost to and beat him up? U think that low of me CJ? I just did your fuckin podcast. Snakes in the grass boy I tell ya 🤣

McCollum then moved to downplay the exchange shortly afterwards.

There is no feud y’all gotta chill. It was simply an analogy. I’m done speaking on KD and the warriors bc it’s childish of me to do so and soft lol (will be taken out of context). I’ve always said what I feel but we all know I’ve never been a 🐍. Back to the grind pic.twitter.com/93B39bqKTS

But Durant’s comments and general smugness certainly seemed to annoy him, especially judging by his initial Twitter response.

It’s too bad we’ll have to wait at least two and a half months for these two to face off on the court.

In the meantime, can someone please lend KD a copy of How to Win Friends and Influence People?