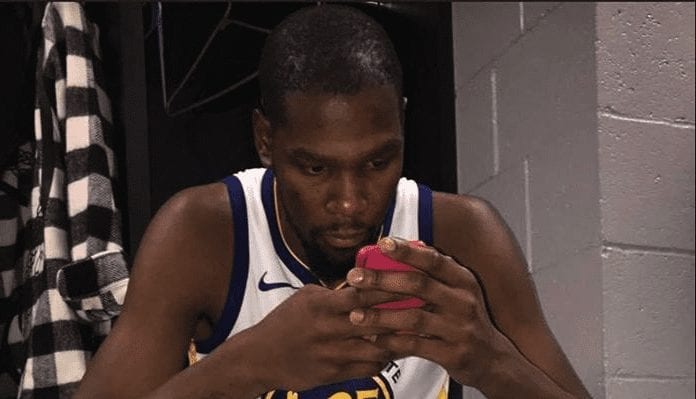 A teenage Instagrammer has spoken out about the baffling experience of having Kevin Durant take him to task online.

Describing the ordeal in a piece for The Guardian, 18-year-old Kalyb Champion said he couldn’t believe it when Durant appeared in his Instagram notifications after he questioned KD’s playmaking and leadership.

KD out here railing against an Instagram page run by a teenager. pic.twitter.com/OujHCHaLAE

“About two hours later, I was in my bedroom scrolling through my comments and I saw a verified checkmark among them,” Champion wrote. “It was a little surprising to find out it belonged to Durant, a two-time NBA champions and one of the best players in the game.”

The fresh-faced aspiring sportswriter then jumped on Instagram Live to alert his followers to what had just happened.

Durant, who is clearly immune to irony at this point, jumped on the live stream too and said Champion “needed to have some fucking confidence” in himself.

KD out here beefing a high schooler in the DMs. 😶
[Via Instagram/bucketscenter] pic.twitter.com/vnTdCJLlzu

Within minutes, the incident was all over the national media, appearing on outlets such as Bleacher Report and USA Today with SportsCenter even contacting Champion to appear on their Snapchat.

“Later in the week Durant reached out to me in my DMs about the situation,” Champion wrote. “The attention I got from the story has helped raise my profile and he said he’s glad I got it. I also apologised for any offence he took from my comments and he did the same towards me. We then had a casual conversation about basketball, and I was able to pick the brain of one of the greatest talents in the sport.”

Related Article:  JaVale McGee Has A Very Special Reason To Be Excited About Playing In LA

It remains unknown whether Durant has burst into tears over the opinions of teenage writers since.

In the meantime, someone needs to confiscate that man’s phone ASAP.