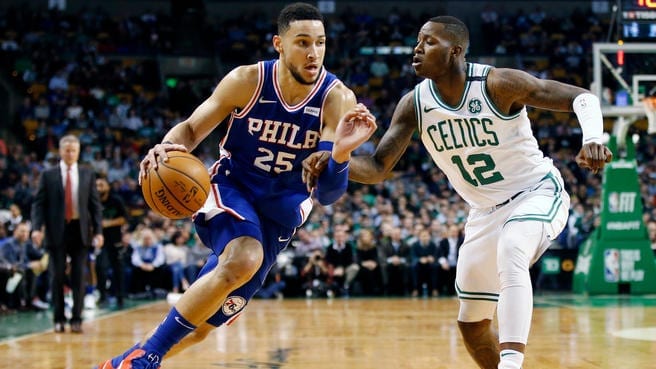 Forged through the exploits of Bill Russell and Wilt Chamberlain in the 60s and rekindled by Larry Bird and Julius Erving in the 80s, Boston vs Philadelphia is one of the NBA’s great ancient rivalries.

After all these years, we might just see it spring back to life in 2018.

While it’s a series which would undoubtedly be more fun with Kyrie Irving and Gordon Hayward as active participants, we could still be in for one hell of a show.

But before getting the popcorn all hot and buttery, here is a handful of burning questions heading into the series.

Will recent history repeat itself?

Boston won the season series 3-1, but all three of those games featured Kyrie Irving, and the Celtics lost the one game he didn’t he play.

Additionally, all four of those clashes occurred during the first half of the season, but it’s a different world we live in now.

The Sixers are a significantly better team, having finished the season on a wild 16-game winning streak before beating Miami in five games, while the Celtics have been further decimated by injuries.

While Boston showed their mettle against Philly during the regular season, the game has changed dramatically since.

How do they compare in terms of raw talent?

When the playoffs roll around and rotations tighten, it doesn’t matter which team has the most extensive arsenal, but the biggest primary weapons.

Regular season success is cute, but it doesn’t translate into much if you don’t have the best player on the floor in the playoffs (just ask Portland fans) (actually it’s definitely too soon for that).

In Philly’s case, they have the best two players.

Despite being loaded with top five draft picks, Boston doesn’t have anyone quite on the same level as Simmons and Embiid, and could find themselves overwhelmed as a result.

Simmons has struggled against Boston at times, although that was before shooters Marco Belinelli and Ersan Ilyasova arrived on the scene and made his job noticeably easier.

Making matters worse for the Celtics is Jaylen Brown going down right as he’d emerged as his team’s new leading act, having averaged 17.9 points during the first round.

Brown’s absence also makes Boston smaller, which could cause a variety of problems against a lengthy, Embiid-led Sixers defence.

Bear in mind, Boston only had the 18th best offence during the season and that was with Irving in uniform for three quarters of their games.

How far will Boston’s defence take them?

Boston managed to fend off an athletic, superhuman freak in round one.

Copping a pair of them in round two.

Ben Simmons and Joel Embiid showed composure well beyond their years the begin the postseason, but one wonders how far that will extend into their maiden playoff voyage.

Miami didn’t have anywhere near the Celtics’ level of defensive personnel, with the men in green able to throw any mixture of Semi Ojeleye, Jaylen Brown, Jayson Tatum and Marcus Smart at the 76ers.

It’s an assortment of bodies boasting both the size and strength you’d want to slow Simmons and friends, while Brad Stevens has hinted Aaron Baynes could also prove effective in limiting his fellow Aussie.

Stevens’ constant scheming and savvy adjustments, combined with his players’ undying work rates, will combine to provide Simmons with his greatest test yet.

But for Boston to properly compensate for their lack of offensive firepower, they’ll need to limit Embiid too.

The good news is they managed to do exactly that during the regular season.

The big man shot 38.5 percent in Philly’s season series against Boston, as the Celtics well and truly put the clamps on.

It’d take a brave man to bet on Embiid continuing that slump, but if Boston can just hold him below his standard production, they could be in with a shot.

I’m not sure which answer to this yes/no question would be more terrifying for the Celtics.

If Embiid is feeling 100 per cent after breaking his face on Markelle Fultz’ freshly repaired shoulder, Boston’s mayor should be declaring a state of emergency as we speak.

But if he isn’t, that means he still has plenty of room to improve on the already dominant three games stretch which saw him drop 18.7 points and 10.3 rebounds on Miami while absolutely terrorising them on the other end.

Admittedly, Embiid shot at just 42 percent and was turning the ball over like a madman.

But still, the Heat shot just 5-for-19 at the rim when Embiid was defending it.

Good luck with that, Boston.