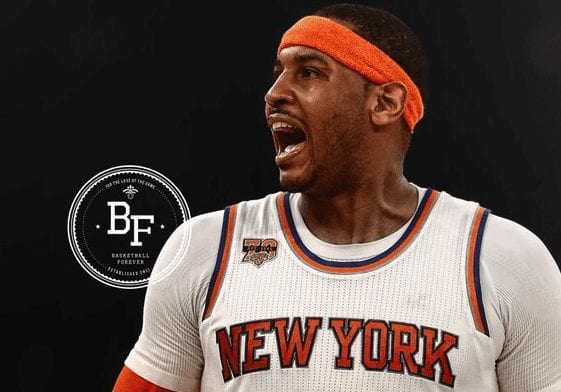 Remember when Carmelo Anthony would take the ball hard to the rack?

Sure, the only footage of him doing it is so old it’s in SD 4:3 at best, grainy black and white at worst.

But it absolutely used to happen.

At some point, however, Anthony developed a serious paint allergy, got the hell out of the keyway and never looked back.

While there were injuries along the way, his retirement from driving the lane seemed to arrive well before his old age.

And yet, as frustrating as all this was for some, Melo managed to get buckets from absolutely everywhere else anyway.

The beauty of getting to the basket consistently is not just that it presents high percentage shots, but that it frees up space to get off outside jumpers.

But Melo knew he could get those shots off anyway, and in the latter stages of his career, that more or less made up his entire offensive repertoire.

Rarely was his proficiency in this style of offensive basketball more evident than when he went for 50 against the Heat almost exactly five years ago, without taking a single shot in the paint.

While Melo has often been criticised for being a ball-stopper, just about every point he scored that night came within the natural flow of the offence.

As Zach Harper wrote for CBS Sports at the time, “This wasn’t the superstar Melo we’re used to seeing in the NBA; this was the Olympic version of Carmelo Anthony that torched opposing defences before they even smelled the smoke.”

Melo’s highlight reel that night consisted of an endless barrage of silky smooth catch-and-shoot buckets, mixed in with mid-range and long-range pull-ups, as he finished the game shooting a red hot 18-26 from the field.

Making the whole thing even harder to comprehend was that Anthony inflicted all that damage without committing a single turnover.

He was just the 11th player in history to drop 50 without turning the ball over once, and the 21st player to score 50 on 26 shots or fewer.

These days, Melo is attempting to sacrifice for the good of the team as Oklahoma City’s third option.

And fair enough too, it’s a common theme among older players as they come to grips with their ring-less trophy cabinets and NBA mortality.

But there was certainly something intrinsically fun about the Melo of old.

Especially on wild nights like the one he had in Miami.