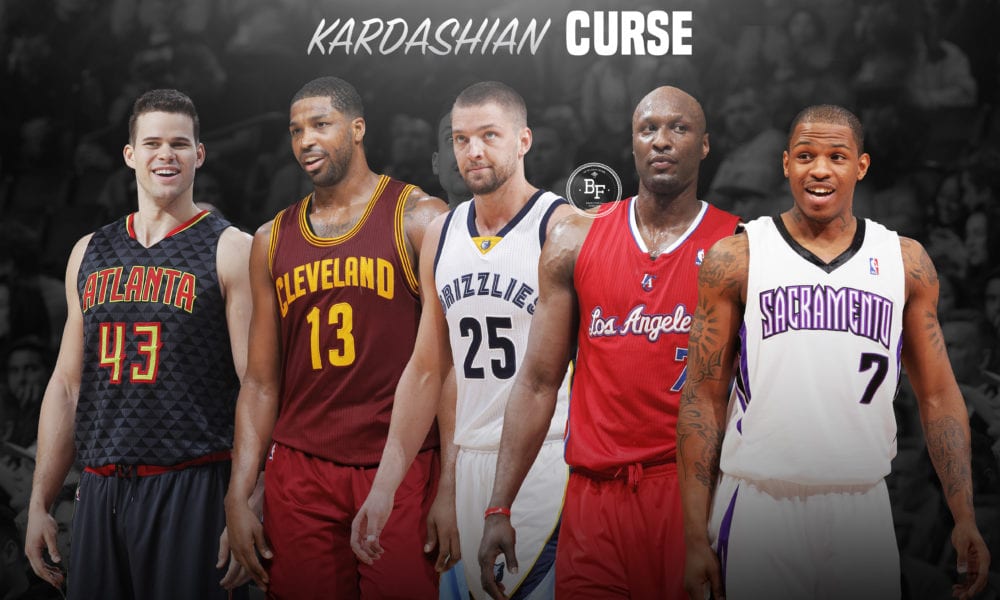 For years NBA players have been finding their careers shot to hell after dating a Kardashian.

These are the guys who wilted under the intense spotlight that comes with dating a member of America’s most famous family.

But a less studied aspect of this bizarre phenomenon is the financial fallout.

Let’s break this down, player by player.

Oh and be warned, this investigation is fraught with wild speculation, questionable-at-best mathematics and threes time the daily recommended dose of Kardashians.

You know what else he was doing that season?

Experiencing what it felt like to be the most hated player in the NBA, as fanbases all over the country booed him into submission following the end of his 72-day marriage with Kim Kardashian.

Despite being largely healthy the following year, he put up just 5.8 points and 5.6 rebounds in a reduced role with the Nets.

Coming off a two-year, $24 million contract with New Jersey (which was later traded to Boston), Humphries’ next contract was a diminished $13 over three years.

He then made bout $8 million over a year and a half with the Atlanta Hawks, before disappearing from the league ahead of this season.

But imagine if the Humphries-Kardashian shitshow never happened and the once effective big man never spent every waking moment being filmed for Keeping Up with the Kardashians.

Let’s keep this simple and say Humphries would’ve continued making $8 million a year (as an average which factors in age-related depreciation) from that first Wizards season in 2014-15 through to 2020, when he turns 35.

That would land him $48 million across his post-Nets career, as opposed to the $21 million and change he ended up with.

Tristan Thompson is yet to experience the Kardashian Curse in a financial sense, but it’s coming.

Pre-Kardashian Thompson was giving Cleveland close to 10 and 10 every night, as well as providing the elite rebounding and rim presence the Cavs needed.

But current day Thompson has dropped off to 6 and 6, while finding himself completely shown up by new teammate Larry Nance Jr.

Unless LeBron puts his Klutch Sports agent hat on for Thompson, as many thought he may have during the summer of 2015, the Canadian big man is heading for a significant pay cut at the end of the 2019-20 season.

Bearing in mind Thompson was overpaid even when he was providing his highest level of production, let’s says the Cavs (or another team) would’ve paid peak Tristan $8 million a season (factoring in age-related depreciation) until he neared retirement age at around 35.

That means Thompson finishes his career with at least another $48 million.

Instead, he’ll likely be payed similar money as a fellow defensively-minded big man who averages about 6 and 6, such as Patrick Patterson, who’s earning a little more than $5 million over the next three seasons.

This means Thompson finishes up with about $30 million.

Lamar Odom has been through a lot and his downfall has undoubtedly been due to a combination of factors.

For starters, the man himself has stated that his drug habit formed in the mid 2000s due to personal tragedy.

But Odom maintained an elite level of play right through to the 2010-11 season, during which he averaged 14.4 points and 8.7 rebounds as Sixth Man of the Year for the defending champion Lakers.

But less than two years after marrying Khloe Kardashian, Odom’s career was spiralling in Dallas, and it was over all together the following year.

While there was a lot going on for Odom at the time, the overwhelming demands of both the Kardashian and NBA worlds proved to be a bad mixture once again.

And while Odom’s fall from grace can’t be entirely attributed to Khloe Kardashian, his daughter Destiny certainly believes she was a significant factor, telling People her father had an addictive personality and that he was addicted to the attention he received with Khloe.

Had he held it together, it would’ve been more than reasonable to expect an admittedly ageing Odom to sign somewhere for at least $12 million over three years.

Especially considering players like OJ Mayo were signing for twice that at the time.

Rashad McCants played just four years in the league despite being a star at North Carolina and an NBA lottery pick.

In McCants’s case, I won’t even need to continue this wild, Fox News-esque speculation when it comes to calculating the financial damage associated with the Kardashians, because McCants once put a dollar figure on it himself.

“Without that situation in play, I’m a $60-70 million player,” he told the Charlotte Observer last year.

We’ll take his word for it.

Following the 2015-16 season, James Harden described the past 12 months as the worst of his life.

He simply couldn’t handle the overwhelming attention that came with seeing Khloe Kardashian.

But his defence was beyond awful, he looked completely disengaged at times, and the following Kardashian-less season he was so damn good he should’ve been MVP.

You dodged a bullet there, my bearded friend.

Despite Chandler Parsons’ body giving up on him and his supposed involvement with Kendall Jenner once upon a time, his salary still looks like something straight out of Silicon Valley.

Parsons signed a staggering 4 year, $94.8 million deal with the Memphis Grizzlies ahead of the 2016-17 season, completing his transformation from one of the most underpaid players in the league to one of the most overpaid.

Here’s his two seasons with the Grizzlies so far:

At least Parsons has remembered how to shoot this season, but he’s still only managed 66 games over the past two years and his next contract figures to be much, much smaller (and possibly in China).

Had Parsons maintained his original Houston form throughout his career and signed one last big deal, he could’ve earned on average about $15 million per year from 2016 to 2026 (factoring in depreciation), makes $150 million in that time.

And sure, Parsons’s problematic string of injuries contributed, but who am I to argue with the Kardashian/Jenner track record?

So there you have it… the keys to a successful NBA career: work hard, eat right, and avoid the Kardashians at all costs.

Or it will cost you.