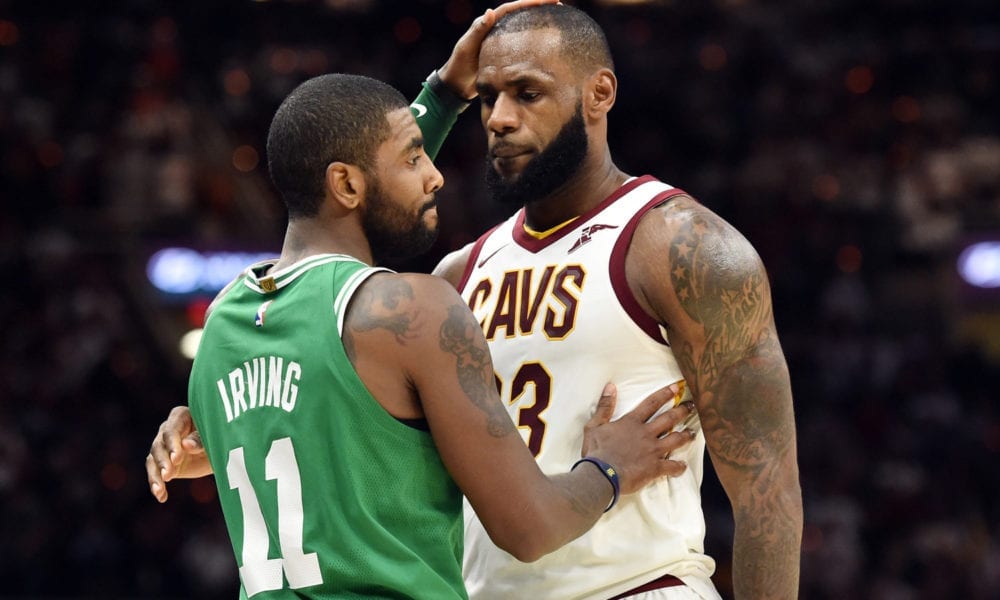 The plot surrounding Kyrie Irving’s exit from Cleveland is beginning to thicken just in time for the Cavaliers’ visit to Boston on Wednesday.

Legendary ESPN writer Jackie MacMullan dove deep into the relationship between Irving and LeBron James this week in a bid to gain a greater understanding of Kyrie’s departure.

What she found was two men at loggerheads, the pair still disagreeing about why their split occurred.

First there was Kyrie, addressing his move to Boston at Celtics practice recently.

“They didn’t want me there,” he said.

Then there was James’ response, speaking after a win over the Atlanta Hawks in Cleveland.

“That makes absolutely no sense,” he declared.

It’s hard to know exactly when the relationship between the two took a turn for the worse, but they share a colourful history and it was likely a combination of factors.

It’s believed a major factor in Irving’s dissatisfaction was Cleveland pushing for a deal which would have shipped him out of town in exchange for Paul George.

Irving reportedly believed James pushed for the deal to be made.

Then there was Irving’s father, Drederick, who “filled Ky’s head with ideas that we didn’t appreciate him,” as one Cavaliers executive told MacMullan.

Skip ahead to this past offseason and you would’ve noticed James repeatedly referring to Kyrie as “the kid”, which rubbed Irving the wrong way.

LeBron also did little to defuse the rumours of a rift between the pair.

On top of all that, there was the on-court stuff.

Irving was never going to be the man as long as he played with the all-consuming James, and he knew that there were greater possibilities for his own game.

There were also his disagreements with Cleveland coach Tyronn Lue, one of which was detailed by MacMullan.

“Because if we play faster, we get shots off easier.”

“I don’t need to play faster to get my shot off,” Irving replied. “I can do that anytime.”

While Irving admitted he’d “like a do-over on that”, that didn’t stop him from taking another dig at Lue when explaining the incident.

“I was trying to figure out where I fit in and at the same time asking myself, ‘What’s best for the team?’,” he said. “Sometimes, I didn’t know the answer. I had to figure it out on my own. It wasn’t like I was getting answers from everyone else.”

Wednesday night in Boston is going to be fun.