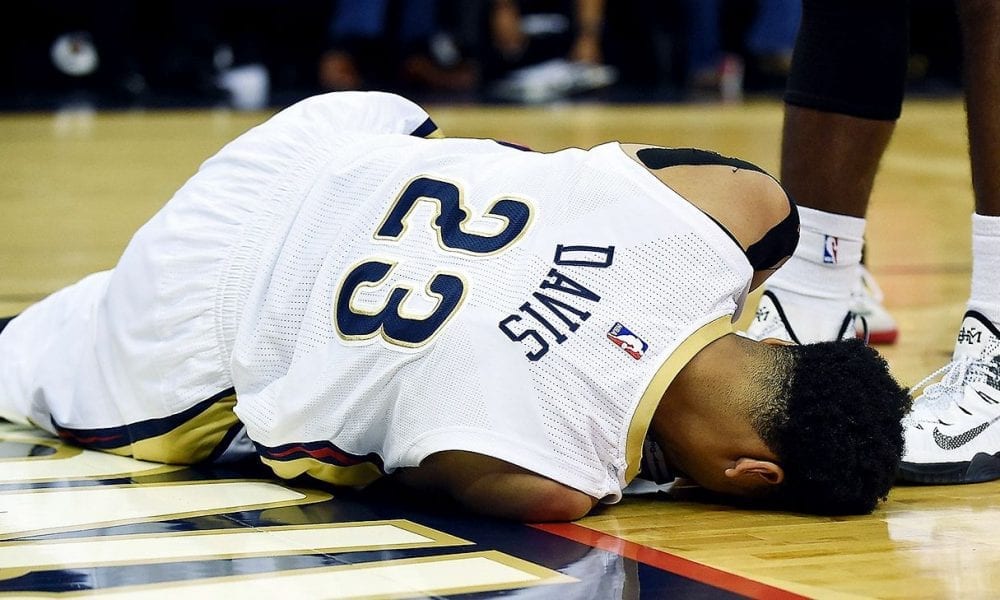 In this world nothing can be certain except death, taxes and Anthony Davis injuries.

Davis added to his extensive list of ailments on Tuesday night in Portland while merely jostling for position with Maurice Harkless during the opening play of the game.

The Brow swiftly underwent an MRI and it came back negative, but Pelicans coach Alvin Gentry told reporters the team would know more on Wednesday.

As @PelicansNBA AD gets MRI on L knee, getting word he tweaked knee during pre game warmups & was trying to make a go of it bf Harkless bump

Davis has suffered more than 25 injuries (!) in just a tick over five seasons in the league.

He has injured almost every conceivable part of his body and looking at AD’s injury list is like looking at his Inspector Gadget arms: there’s just no end in sight.

The above screenshot isn’t even the entire list, as he also had a sore knee in April this year, and of course, injured his knee again in Rip City on Tuesday night.

Many Pelicans bloggers have wondered out loud if the New Orleans training staff deserve at least partial blame for the team’s crippling injury history, which is by no means limited to Davis.

It’s only speculation at this point, but as eternally injured former Pelicans – such as Eric Gordon and Ryan Anderson – continue to leave town and enjoy much healthier careers, the speculation surrounding where the bad luck ends and the incompetence begins will only intensify.

As for the Brow, all the evidence suggests his body simply cannot handle the rigours of an 82-game season, and his leg buckling while preforming a simple post-up is perhaps the clearest indication we’ve had yet.