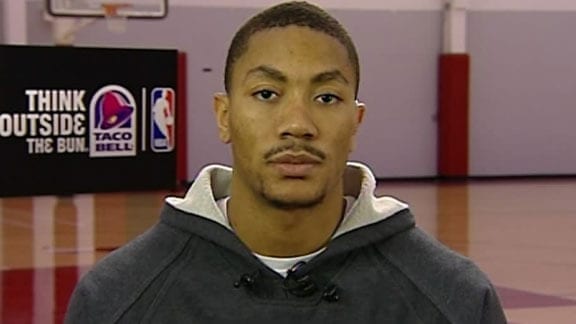 It was once widely believed that Derrick Rose had no interest in recruiting players.

This was a quiet, humble player with little interest in super teams or front-running, a man focused on leading his hometown Bulls to the promised land, even if he had to do it by himself.

Rose fuelled that public perception at the time with the comments he made 18 months after the wild summer of free agency in 2010.

“I’m not going to do that,” Rose said when asked about making pitches for players to join him in Chicago. “If you want to come here, come here, but it’s not up to me to make that decision. I’m not paying them.”

Rose was even chastised in the media for not helping his Chicago Bulls to attract a big name, while Pat Riley was putting everything – including his extensive collection of championship rings – on the table in front of the league’s best players.

But today we learnt a different story.

“Oh yeah, yeah, I tried,” Rose said. “People always said that I didn’t recruit. I tried to recruit. I put out the video, but, it wasn’t for me to say that. I felt like it was for the organization to say that.”

“(The Bulls) didn’t say anything about it. They sent it, I don’t know if they really actually looked at it or played the video, but, I made the video, but at the time it really wasn’t for me to say that.”

As fait would have it, Rose would eventually team up with James and Wade, forming Chicago’s dream big three, albeit in Cleveland seven years later.

As for Rose’s recruiting in 2010, it turns out that in a league driven by star power and super teams, even the quietest of voices speak up when there’s big fish on the market and a pitch to be made.