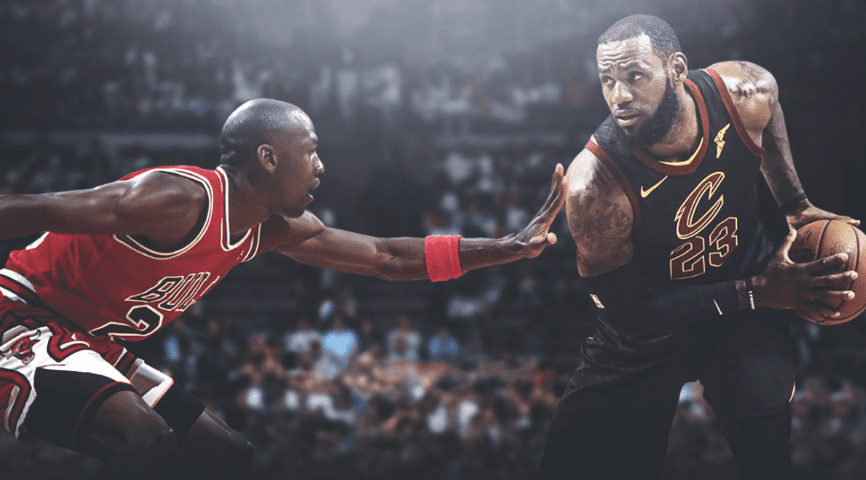 In the world of professional basketball, Michael Jordan is considered by many as the GOAT (‘Greatest of All Time’). However, fellow player LeBron James is also believed to be just as worthy of the title, if not more so. These legendary players are worth over $1 billion each thanks to their sporting prowess and business ventures.Watching Lebron or Jordan sink a 3- pointer hitting nothing but net is as hype as watching the roulette ball sink into the winning division of the roulette wheel while playing live dealer casino games. The excitement value these players have brought to fans and for Lebron’s case is still bringing, will cement them forever regardless of who is actually the best. However, for curiosity’s sake, let’s compare some stats and achievements!

Also known as King James, LeBron James is 37 years old and is still an active player. He started his career in 2003 and is now playing for the Los Angeles Lakers, his fourth professional team. Some of his most impressive achievements include: winning two Olympic gold medals, being named the NBA Most Valuable Player four times, being an NBA champion four times, and being named 2020’s Time Athlete of the Year. LeBron has a field goal percentage of 0.504%, makes an average of 7.3 assists per game, and earns 27.1 points per typical game. Michael Jordan Michael Jordan is known as ‘Air Jordan’ and ‘His Airness’ because of his impressive leaping ability. Now retired, he played at the professional level from 1984-1993, then from 1995- 1998, and finally from 2001-2003. Some of his many awards and honours include being a six-time NBA champion, a ten-time NBA scoring leader, and a fourteen-time NBA All-Star. He’s won two Olympic gold medals, received the Presidential Medal of Freedom from Barack Obama and has been inducted into several halls of fame. His field goal percentage is 0.497% and his average number of assists per game is 5.3. His average number of points earned per game is 30.1, which is an NBA record.

As mentioned previously, Michael Jordan is regarded as basketball’s GOAT. This is not only because of his stats but because of what else he brought to the game. Throughout his career, he became a much-loved public figure and encouraged many people to not only watch basketball but to play it too. But how exactly do you determine the GOAT? Is it fair to go by stats since the two players are from two different periods of basketball? Remember, Michael retired in 2003, the same year LeBron played his first professional match. There’s no definitive way to conclude who is the GOAT – do you measure up all stats or only certain ones? – which is why the debate is ongoing.

As you can see, LeBron James and Michael Jordan are both incredible players that have certainly proven themselves. Both of them have smashed records, notched up a huge number of wins and cemented their names in the history books. Others such as Kareem Abdul-Jabbar and Magic Johnson come close, but LeBron James and Michael Jordan are in a league of their own. Who of the two is the GOAT? It’s ultimately based on your own personal judgement!