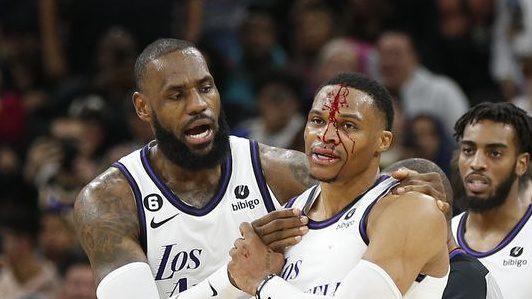 LeBron James has spoken out on the flagrant foul that left Russell Westbrook bleeding from the head on Saturday.

The incident occurred when Spurs big man Zach Collins caught Westbrook across the head with his forearm while defending a put-back attempt.

“His health is more important than the game of basketball,” James said. “So just tried to stop that and let the training staff do their job after we got him over to the bench.

“I actually saw the cut right when it happened once he got up off the floor and wanted to, uh, wanted to do something to Zach.

“…Before we became teammates, we’ve always been like brothers, and cool, and things of that nature,” James said.

Collins was assessed a flagrant 2 foul, which comes with an ejection, while Westbrook was given a technical foul for his reaction.

“I was confused on that one myself,” Westbrook said of his technical. “I wasn’t sure why I got one, but I’ll check with the league and talk to them about it and we’re figure out why that was. Maybe it was because I probably hopped up or something. I’m not sure.”