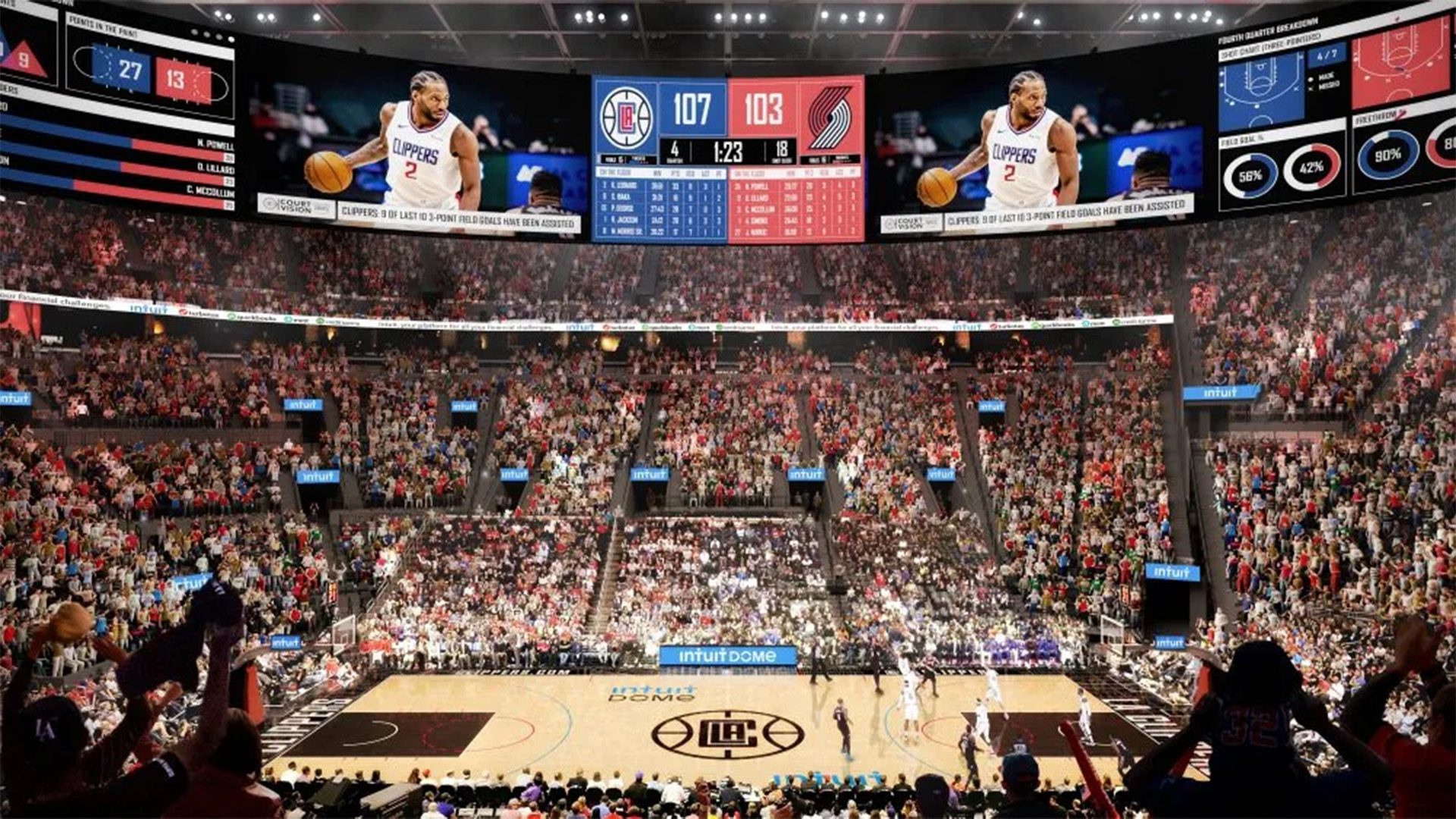 It’s been just over a year since the LA Clippers started construction on their lush new $2 billion dollar stadium, the Intuit Dome. It looks as though they will be set to play there for the 2024-25 season. Clippers fans, secure your seats!

Surely, the fans are sick of sharing Crypto.com Arena with three other professional entities. Clippers owner Steve Ballmer seems to think so.

“We needed to say, ‘We’re our own guys. We don’t play in the same place as the other guys. We’re going to have our own identity,'” Ballmer told ESPN at in September 2021 when construction began.

Clippers President of Business Operations, Gillian Zucker says things are progressing nicely at Inglewood: “It’s moving along so well. You can walk on some of the concourse levels. You can go into areas where the clubs are going to be. The roof will be going in shortly. It’s pretty exciting. They’ve gotten a lot done in just a year.”

For the $2 billion dollar price tag, you’d expect some pretty cool features and it sounds like the stadium will definitely have a bucketload of them.

The arena will have a first of its kind two-sided halo scoreboard, which will go around the entire facility and stretch wider than the actual basketball court in order to share more information with fans.

“So in addition to being able to see things you normally see like replays and roster, you’ll also be able to see so many statistics and we’ll be able to bring a different type of entertainment,” Zucker explained.

The Intuit Dome, the future home of the LA Clippers, will feature an acre-sized Halo Board, the largest double-sided scoreboard in an arena. pic.twitter.com/xCbFLDo9Lr

In one of the end zones there will be essentially a wall of people, that is 51 rows high and seats 4700, creating an unbroken grandstand with a standing supporter section in the middle to really cheer the home team on and create an unparalleled atmosphere. Imagine watching The Battle of LA in a seat like that!

Now, for those fans / rich celebrities who are willing to spend some extra dough, there are a number of luxury suites available and they look incredible.

Backstage bungalows offer lower bowl seating access to in-venue entertainment, all-inclusive food and beverage, and unmatched comfort, while being in the center of the action. Designed for both a Clippers game or concert.

Halo suites are the one exclusive suite level in the arena with sight line, comfort, and entertainment, while giving you one of the best seats in the house.

It will also include “Halo Suites.” The Clippers say the Intuit Dome will feature “one exclusive suite level” where the “Halo Suites” will be located. pic.twitter.com/cQWKouiSwA

Halo loft is basically your own private club ideal for smaller, more intimate gatherings. The lofts offer four-person boxes, all-inclusive pre-game dining, as well as a concierge service. So it’s pretty much all the luxuries without the price commitment of a suite.

Ballmer has had plenty of involvement in the project and one of the most important aspects for him was to make sure the seats had the right amount of legroom for the fans. Which is such an important thing to hone in on. How many times have you been at a stadium and your knees are awkwardly being tickled by the person’s long hair in front of you? Or you have to get up and do a little dance to make sure people can pass you to their seats?

“We built all of these little grandstands, small grandstands, so that we could test the various different types of seats that you could potentially purchase for the facility, and he [Ballmer] ended up choosing the actual seats because they gave people about an extra inch or two of leg room that in a facility makes an enormous difference,” Zucker said.

Amazingly, the team says the arena will contribute positively to the environment. The plan is for the Intuit Dome to be fully electric through batteries and solar power with enough on-site energy storage to power an entire basketball game.

“I think it’s really important as you think about anything that you’re doing in the world today on the impact it has on the environment and the future. When we think about sports franchises, you think about the love that’s passed down from parents to our kids to their grandkids and so on and we want to be a part of the solution for that,” Zucker said.