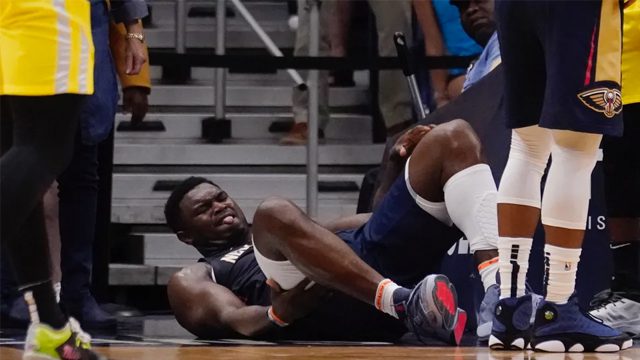 The Pelicans nearly made an incredible comeback against the Utah Jazz and forced overtime without Williamson and Brandon Ingram – who went out with a concussion during the game.

Williamson sat the final 8:07 of the game following a fall when Jordan Clarkson blocked his transition dunk attempt.

Jordan REFUSING to give up on the play ☮️#TakeNote pic.twitter.com/dA9sIwkPx0

Williamson did not go back to the locker room after the fall and late in the game was seen trying to talk to Pelicans coach Willie Green, apparently asking to re-enter the game.

Green said postgame he was told by the team’s medical staff Zion could not re-enter.

Williamson finished the night with 25 points on 10-of-16 shooting plus six rebounds in 30 minutes and based on his willingness to return to the court, the injury does not appear to be serious.

The same is true for Brandon Ingram, who played just 11 minutes and none in the second half after he was sat down due to “concussion-like symptoms”, though there were no details on this after the game.

The Pelicans made their run late in the game by going smaller, with Zion out.

Green also decided to sit Jonas Valančiūnas and play Larry Nance Jr. at the five and that lineup, with a healthy dose of CJ McCollum, almost won the Pelicans the game.

Expect Green to go back to that on occasion.

Williamson will look to return soon and build upon a great start this season after missing significant time last season with weight issues and a foot injury.

The Pelicans are off to a good start with a 2-1 record and look to build off their late-season success from this past April.