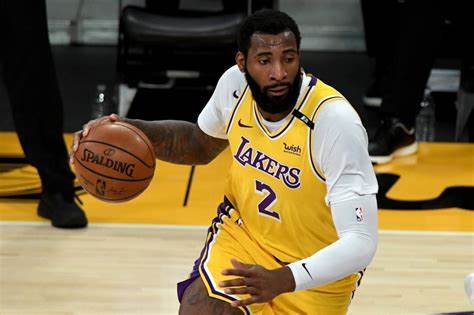 Two-time All-Star and current Brooklyn Nets center Andre Drummond only played for the Lakers for a season and a half, but it was a memorable experience.

After being bought out by the Cavaliers, LeBron James helped recruit Drummond to Los Angeles in 2021, and with big expectations.

However, Drummond got injured in the first game when Bucks’ big man Brook Lopez stepped on his toe.

Drummond missed time, and when he came back, he showed flashes of the interior scoring and rebounding the Lakers needed, but he was inconsistent on offense and was often exposed on defense.

The Lakers promised him a starting role and minutes when he arrived, creating tension with Marc Gasol.

In the 25 games he played in a Laker uniform, Drummond averaged 11.9 points and 10.2 rebounds a night.

Lakers fans were not shy in letting Drummond know what they thought of his performance.

Asked about it recently, Drummond was honest about the experience.

Andre Drummond on his time with the Lakers:

"You got to be built differently to play for that organization." pic.twitter.com/HqceJwCknM

“Yeah the Lakers is exactly what you think it is, man, you gotta be built differently to play for that organization. You gotta be mentally strong not only on the court but off the court too because there’s so much expectations to being a Laker and putting that purple and gold on because if you ain’t living up to expectations, they will let you know you ain’t worthy enough to put on that jersey,” said Drummond.

As fans and players alike are aware, playing in Hollywood with the Purple and Gold is not your average experience.

Laker fans are notorious for voicing their opinions toward players, especially when they are not living up to expectations.

Just ask Dwight Howard during his first stint in LA.

There are unquestioned perks of being a Laker, but it requires players who cannot get caught up in the distractions, can tune out the chatter, and focus on the game.

Not everyone does that equally well.

Andre Drummond is now in Brooklyn, another team with championship aspirations and a lot of noise and distractions.

However, Drummond didn’t walk in the door at the Nets facility with the expectations heaped on him in L.A.

Now Brooklyn tries to put behind it’s own rollercoaster season to obtain glory next season.