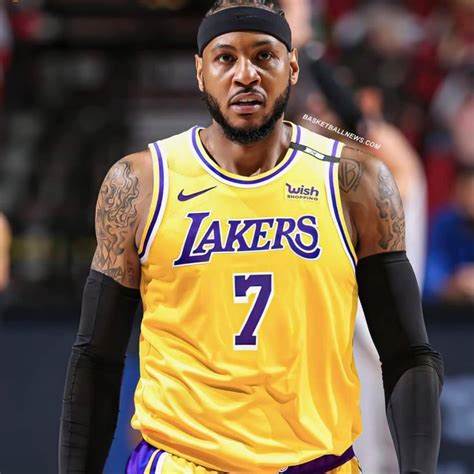 Lakers forward Carmelo Anthony ended an efficient season by missing the playoffs as his team spiraled into a vortex of chaos.

Retirement is a legitimate option for Anthony, who turns 38 in May.

Around the league, though, it’s believed he will play at least one more year after proving to be effective as a backup forward who can shoot, having knocked down 37.5% of his 3-pointers this season, after making 40.9% in Portland last year.

“There is a comfort level with living in L.A. and playing there,” one NBA source said.

“The starting point on him coming back and not retiring is signing on with the Lakers and hoping that they fix the roster and the coaching situation. But it’s wide-open.”

There are a number of options available to Anthony after this season.

If Anthony wants to get back to his roots, according to executives around the league, the Nets stand out as the big opportunity.

Anthony was born in Brooklyn.

“If he wants to go back to the area, the Nets stuff will pop up again,” the GM said. “He’d probably rather be there than back with the Knicks. He won a gold medal with Kevin Durant and Kyrie (Irving), and they wanted to sign him (in 2019), but the front office wanted more defense. Now, he’s kind of shown he can play a role as a 3-point shooter, and they need to add more shooting because they’re worried about Joe Harris to start the season. If he leaves the Lakers, there will be interest on both sides with him and the Nets. He could win there.”

Two other East teams were mentioned as dark horses: The Celtics and Heat. Anthony certainly would be amenable to a season in Miami, playing with veterans like Jimmy Butler and Kyle Lowry, as well as Bam Adebayo. “That is one place I could see both sides saying it makes sense,” a Western Conference executive said. “But only if Miami makes a trade. They have a lot of young guys who need minutes and they have to figure out how that will be sorted. If it is Melo or, say, Caleb Martin, they’re going to keep building up Martin.”