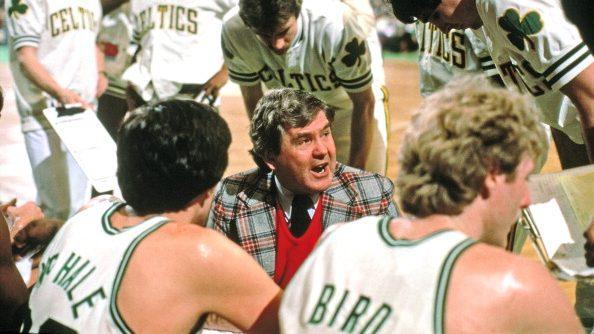 Former NBA coach and Hall of Famer Bill Fitch passed away at the age of 89 on Wednesday.

Fitch, who coached in the league for 25 years, led Larry Bird and the Boston Celtics to the NBA championship in 1981.

A two-time coach of the year, who was named to the Top 10 Coaches of All-Time list during the league’s 50th-anniversary celebration.

The NBA mourns the passing of Hall of Fame coach Bill Fitch, an NBA champion with the Boston Celtics and a two-time Coach of the Year. Bill served 25 seasons as an NBA head coach and mentored countless players and coaches. Our deepest condolences go out to his family and friends. pic.twitter.com/39TOkCTOwQ

Fitch started his career in 1970 with the expansion Cleveland Cavaliers.

The Cavs won just 15 games in their inaugural season, a league-worst.

But during the 1975-76 season, Fitch would coach the Cavs to their first of three playoff appearances under his leadership and earn his first NBA Coach of the Year title.

He joined the Celtics in 1979, winning Coach of the Year again, and led that team to a title the following season in 1981.

“Fitch’s deep knowledge of the game, toughness, and dry wit made him a perfect fit for Boston,” said the Celtics in a press release Thursday. “Fitch had already built a reputation as a turnaround artist, and his ability to get the best out of his players paid immediate dividends as Fitch orchestrated what was at the time the best turnaround in NBA history, vaulting to a 61-21 record.”

Former Celtic Cedric Maxwell, who was a member of the 1981 championship team, recalled how his former coach inspired the team to achieve greatness.

“He gave one of the best non-speeches I’ve ever heard,” said Maxwell, per The Boston Globe. “He said, ‘Guys, you’ve got nothing to lose. Nobody believes you’re going to win this game.’ And it took all the pressure off us. We played like a championship team and became a championship team.”

Later Fitch lead the Houston Rockets to the Finals in 1986 and helped turn the Nets and Clipper franchises into playoff contenders.

Fitch retired with 944 wins and 1106 losses and was elected into the National Basketball Hall of Fame in 2019.