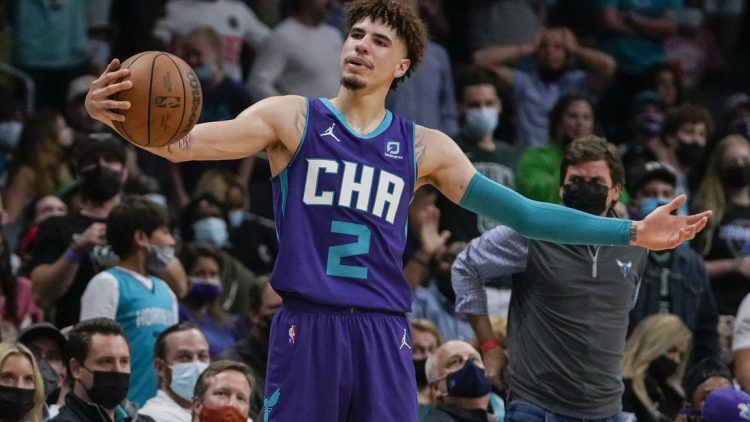 The Charlotte Hornets’ LaMelo Ball is a superstar.

Just ask reigning MVP and NBA champion Giannis Antetokounmpo, who traded jerseys with the Hornets’ guard after the Bucks narrowly escaped with a 127-125 victory Wednesday night.

Ball scored a career-high 36 points, including eight 3-pointers and dished out nine assists, grabbed five rebounds, and had three steals.

Still, it was his 3-pointer with 5.9 left that tied the game and let the basketball world know what his dad LaVar has been saying all along.

This kid is for real.

“I seen the open look, and I took it,” said Ball during post-game remarks.

After the game, Hornets’ coach James Borrego had nothing but praise for the 20-year-old.

“His fearlessness and his composure is fantastic. He’s a great player, and he’s only getting better. This is just the tip of the iceberg. The kids got a bright, bright future,” said Borrego.

Despite Ball’s effort, Giannis would carry Milwaukee to the win with 40 points, 12 rebounds, nine assists, one steal, and a last-second drive to the basket, but even the first-time champion recognized something special had happened on the court that night and traded jerseys with the young star at the end of regulation.

GIANNIS WINS IT FOR THE @Bucks!

The wild finish to a thriller in Milwaukee! pic.twitter.com/rEf4NDXlqB

“The NBA wanted the jersey back. I’ll get another one next time,” said Giannis. “I was excited for it too. He had a great game.”

Charlotte had five players in double figures and a 41-25 lead at the end of the first quarter.

“You know they’re [Hornets] gonna play fast. You know they’re gonna shoot a lot of shots, but once you’re actually out there, you’re like, ‘oh damn,’ they’re moving too fast,” said Giannis. “It’s hard to guard.”

A year ago, Ball was fighting for a starting spot on the Hornets’ squad.

Now, the second-year player is nailing end-of-game, 3-point bombs against the defending champs like a seasoned veteran.