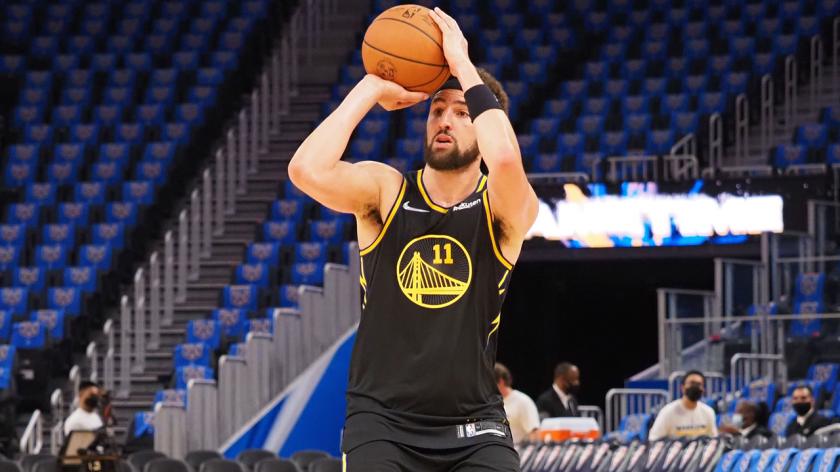 Golden State Warrior Klay Thompson, who hasn’t played a game since rupturing his right Achilles’ tendon in Game 5 of the 2019 Finals, was cleared to play 5-on-5 in practice.

Coach Steve Kerr shared the news with reporters Tuesday after the Warriors defeated the Brooklyn Nets 117-99.

“He [Thompson] played 5-on-5 yesterday, and then I think he’s gonna play 5-on-5 tomorrow,” said Kerr. “A two-year absence requires a lot of work; not just the rehab but the endurance, the strength. So it’s great that he’s playing 5-on-5 but it doesn’t mean he’s gonna be ready to step on an NBA floor next week or something. But he’s progressing really well.”

Here’s a full update on Klay Thompson and James Wiseman from Steve Kerr.
-Klay has been playing 5-on-5, but “that doesn’t mean he’s gonna step on an NBA court next week”
-Wiseman still hasn’t been cleared for 5-on-5 pic.twitter.com/F6W41gjHkf

Thompson is back in California while the Warriors are on a four-game road trip.

Despite Thompson’s absence, the Warriors are 12-2, the best record in the league.

“I’m told if he continues on his current course right now in rehab, that a target date for his return will be set probably within the next couple weeks,” Wojnarowski said. “And it could be; there’s optimism it could be as soon as December 20, December 23. The Warriors have home games before Christmas, and so the plan for Klay Thompson is to continue to ramp up.”

In his last season played with the Warriors, Thompson averaged 21.5 points, 3.8 rebounds, and 2.4 assists.

The 31-year-old’s imminent return is welcome news to Dub Nation, though the team looks like a title contender right now without their five-time All-Star.

Golden State is also waiting on the return of big man James Wiseman who hasn’t played since April 10 when it was revealed he had torn his right meniscus.

Wiseman hasn’t been cleared for 5-on-5s despite being expected to return to the Warriors lineup before Klay, but Kerr won’t need to rush either of their comebacks as the Warriors sit pretty at the top standings.