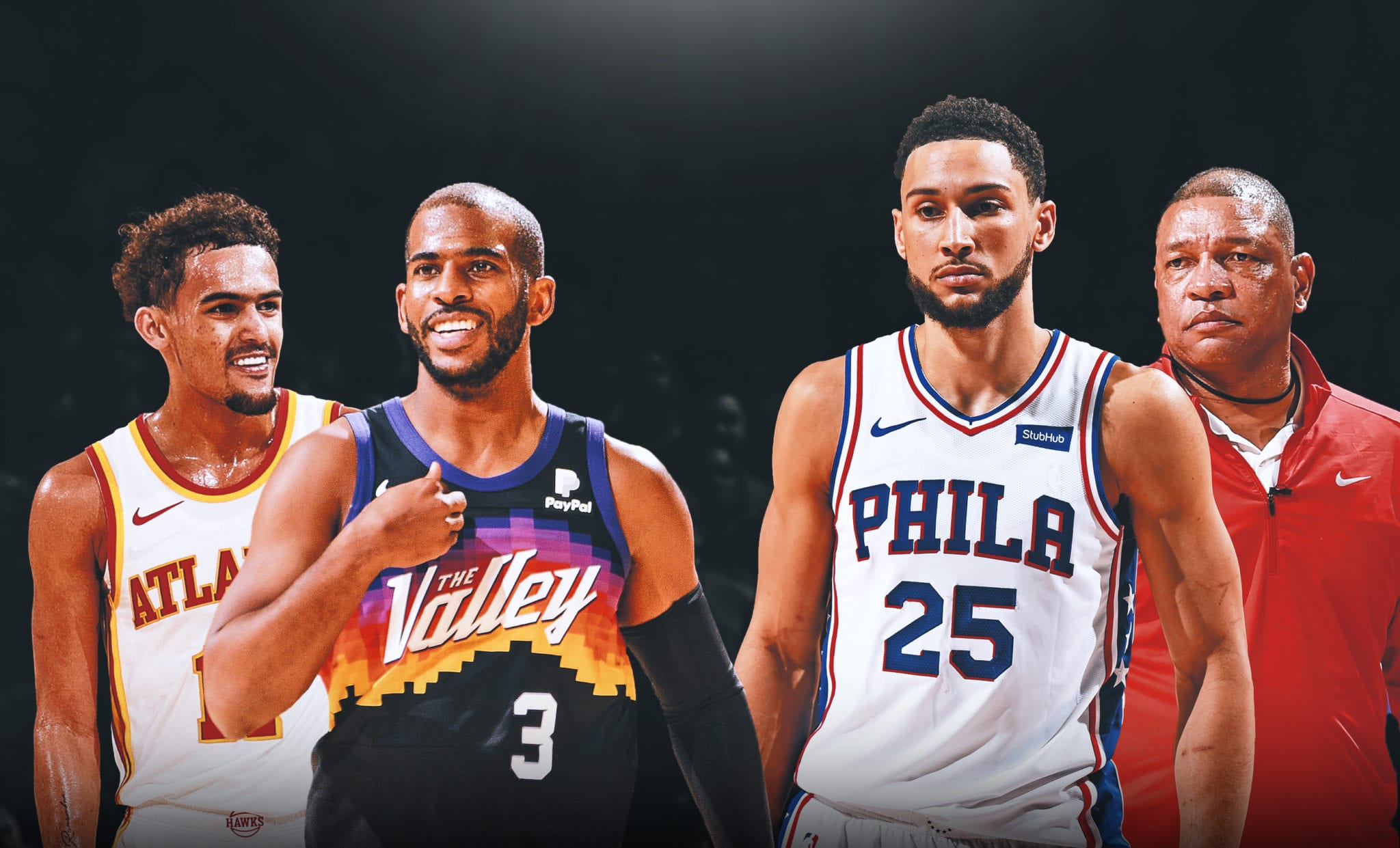 The sheer gravity of the NBA Playoffs means its highest achievers are immortalised forever. However, the opposite extreme is also true, with those falling short under the bright lights often condemned to a lifetime of ridicule.

With Game 1 of the Finals just around the corner, we took a look at the players who made the most of this chaotic postseason, as well as those who came off second-best.

Imagine winning Defensive Player of the Year only to get completely exposed on defence in your most important game of the season. Well, Rudy Gobert doesn’t have to imagine it, because it’s his reality.

When the Clippers went small against the Jazz in the second round, Gobert famously looked completely lost and simply could not guard the perimeter. It was the single biggest turning point of the series, one which the Clippers ran away with despite being without their best player.

Ben Simmons’ playoff struggles have been well-documented to say the least, but to top it off, it really is beyond disappointing that Simmons won’t be playing in the Olympics.

Not only is it a massive let-down for Australian fans, who are dying to finally see Simmons get the Aussies over the hump and onto the podium, but where’s the moxy from Simmons to get back on the horse? Where’s the determination to get better? Where’s the desire to overcome adversity?

He may be able to eventually fix his jump shot in an empty gym – although history strongly suggests he will be exactly the same player next season – but his true problem lies between the ears and needs to be worked on in games. What better opportunity to do so than getting a change of scenery in Tokyo and dominating lesser competition playing for an Australian bursting with chemistry and comradery?

What a desperately needed breath of fresh air that would have been. What a golden opportunity missed.

Is there any remaining doubt that Doc Rivers is a flawed coach who milked the living shit out of that lone Celtics title in 2008?

New York City was absolutely buzzing when their team ended an eight-year playoff drought that must have felt at least twice that long. The stage was set for a round-first classic between the Knicks and Hawks at the mecca of basketball. There was just one problem: New York’s biggest star never showed up.

In fairness to Atlanta, they defended Julius Randle exceptionally well. And while everyone has a bad game now and then, Randle simply couldn’t find his rhythm all series long, having got off to an exceptionally poor start with just 14 points per game on 24 percent shooting over the first three games.

The postseason is where stars are born, but it’s also where they are exposed. With the opposition having days to scout players to within an inch of their lives, there’s nowhere to hide at either end of the floor.

YOU, ME, AND EVERYONE ELSE WHO ENJOYS WATCHING GREAT PLAYERS PLAY NBA BASKETBALL

LeBron James tried to warn everyone that a historically short offseason would lead to a spate of injuries across the NBA, and he was right.

12 of this year’s 16 playoff teams lost at least one star player to injury at one point or another during the playoffs, with the postseason quickly descending into a war of attrition.

Even the two teams that stayed healthy enough to make The Finals, the Milwaukee Bucks and Phoenix Suns, have had to deal with three injured stars between them.

Even now, one is doubtful for Game 1 and another has recently taken a second blow to a nose that had already been broken in three places.

With a longer offseason coming up, Olympics notwithstanding, here’s hoping everyone gets the rest and recovery they need.

With the obvious exception of Ben Simmons, very few players have been on the receiving end of as much public scrutiny as Paul George in recent times.

Some of that was his own fault, dating back to when he started calling himself ‘Playoff P’. Giving oneself a nickname is a dangerous game – Kobe only got away with it because he was freakin’ Kobe – and you’re asking for trouble if you don’t live up to it.

That self-anointed title only made matters worse when George scored 10 points or less in three playoff games last year, and 15 points or less in six games, before capping off a disastrous postseason run with a 4-16 shooting night and a blown 3-1 lead.

Playoff P had become Pandemic P, and considering his confidence had shattered like a chandelier in an earthquake, it was hard to imagine that changing any time soon.

Then Kawhi Leonard was diagnosed with his mysterious injury a year later and everything changed. In the midst of a second-round series with the Utah Jazz that looked all but lost, the man they called ‘PG13%’ stepped up in a major way.

Not only did George score 31 points in the last two games Leonard played – both wins against the Jazz to tie the series at 2-2 – but after his co-star’s injury, he averaged just under 30 points per game while also putting up 11 rebounds and 5.6 assists in a herculean effort which helped the Clippers get within two wins of a Finals appearance that they had no business even sniffing.

LA may not have achieved their ultimate goal, but the Paul George redemption tour gave us one of the most compelling storylines in a league that’s full of them.

You won’t find too many players who love the pressure more than Trae Young. This man was born for the big stage. It’s clear in the way he walks, in the way he talks, and in the way he plays.

Interestingly, despite not being a great three-point shooter – he made just 31.3 percent of his long-range attempts in the playoffs – the Bucks convinced themselves they needed to defend Young like one anyway, perhaps due to his sheer confidence and magnetising star power (with a little incompetence from Bud sprinkled in as well of course).

By attracting so much of Milwaukee’s defensive attention, Young was able to not only score in bunches, but distribute the ball at a high rate as well, averaging 9.5 assists per game over the course of the playoffs, the most of any player to advance past the first round.

Young’s passing game went very nicely with his prolific scoring, his 28.8 points per game a 14% increase on his regular season output.

So much for playoff inexperience.

Unwanted in Detroit and saddled with a reputation for being a subpar teammate, Reggie Jackson’s NBA career was on life support not all that long ago. But the Clippers threw him a lifeline last season, and he grabbed it with both hands.

Jackson played out of his mind for the undermanned and over-performing Clippers, hitting more threes than anyone else in the playoffs by a significant margin.

More often than not, when the Clippers needed a bucket, Jackson was there. It was incredible that this man, of all people, often seemed to be the most reliable option for his team. It was as if these games were being played in some sort of alternate reality where dogs walk people and candy is good for you.

He might’ve been eliminated from playoff contention, but 2021 will be the summer of Reggie, with numerous teams expected to throw enormous wads of cash at him in free agency.

As recently as December, it was easy to think Chris Paul’s legacy had already been written. At the very least, the ink was rapidly drying. Paul appeared destined to go down as a great point guard whose obsessive, calculated style of play never translated into a single Finals berth.

Sure, injury carried a lot of the blame, but so did numerous choke jobs from his teammates, and an especially egregious one from Paul himself.

But now, he may well go down as the courageous all-time great who fought through multiple agonising shoulder injuries that appeared to spell the end of his season, before winning it all with a team no one expected anything from whatsoever.

And all that at the age of 36, well after his supposed expiration date, let alone his “best before”. These have been Chris Paul’s playoffs, and that’s unlikely to change.