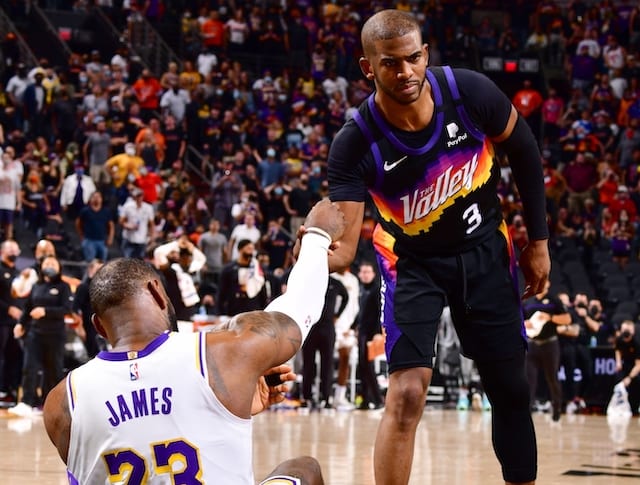 Here is what Paul had to say about Vogel’s accusation:

“I don’t know anything about that. I have absolutely nothing to say about that. We’re just playing basketball and competing,” Paul told Yahoo Sports after the Suns’ victory to take a 1-0 series lead.

“I’m just thankful we got the win, and I’m looking forward to Game 2.”

The play referred to happened three minutes into the fourth quarter when James was at the free-throw line.

When Paul jumped into the fray, James was going in to rebound his own miss.

Paul sprinted from behind to box out the Lakers star, which led to James landing awkwardly on the floor.

James began rolling around on the court while clutching his left shoulder.

“My view was overly aggressive box out, a dangerous play where ’Bron was in the air and got uppercut,” Vogel told media members on a postgame Zoom call.

Paul says that he walked past several Laker players, and not a single one said a word to him about the play.

“You don’t want anyone to get injured on plays like that. But the intensity is where it’s supposed to be. Guys getting into it, chirping. That’s playoff basketball.”

CP3 refused to get into a battle of words with Vogel.

“So I’m just going to enjoy some family time and prepare for the next game.”

Chris Paul looks to recover from his own shoulder injury as he leads the Suns into Game 2, where they will try to get a 2-0 series lead.