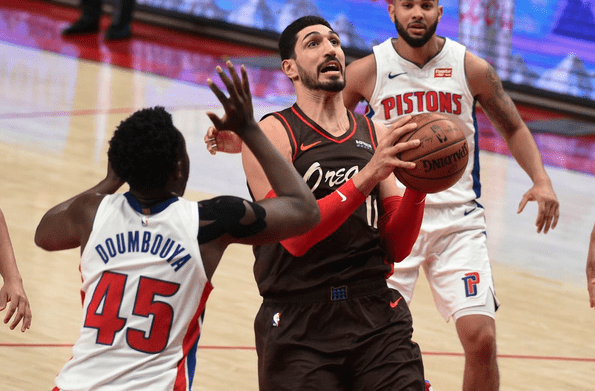 Kanter is only the fourth player in 20 seasons to pull down 30 boards joining Dwight Howard, Kevin Love, and Andrew Bynum.

The 28-year-old, who is playing his tenth year in the league, broke the 46-year-old team record while his teammates cheered him on from the sidelines.

In addition to breaking the old record of 27 rebounds set by Sidney Wicks in 1975 against the Los Angeles Lakers, Kanter added 24 points and two assists.

“They telling me ‘hey just go out there and do what you do best and be a Turkish warrior,'” said Kanter. ”

A 2011 first-round draft pick, Kanter repeatedly credited his teammates for his performance and cited their enthusiastic support as his favorite part of breaking the record.

“My teammates trusted me. They were rooting for me,” said Kanter. “That is the part that I enjoyed the most.”

Blazers’ coach Terry Stotts credited Kanter’s work ethic and attitude for his success that night and the season. “When you look at the effort that it takes to rebound, the persistence at both ends, the beating that you have to take, all of those things are tough to do,” Stotts said. “And the fact that Enes is such a great guy; you can tell by the bench’s reaction how happy the team was for him. But to get a rebound record speaks a lot about the person’s will and drive.”

Despite Kanter’s heroics, the Trail Blazers are just 6-4 in their last ten games and will need to turn it up a notch for a good playoff spot.