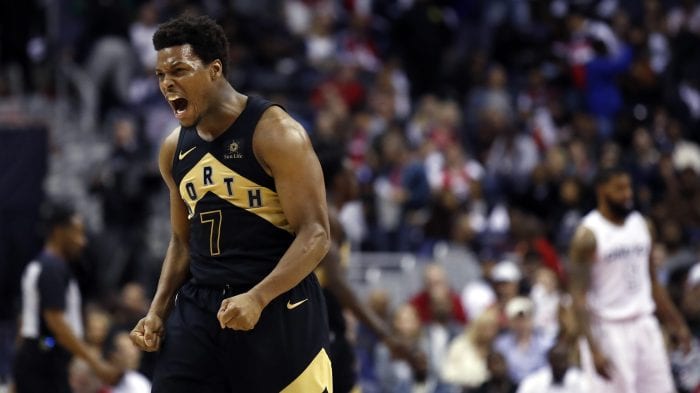 The Toronto Raptors have seen a lot of player turnover in the last two years, but the one constant has been Kyle Lowry.

Last offseason, Toronto lost Marc Gasol and Serge Ibaka to free agency for nothing in return after losing Kawhi Leonard and Danny Green the previous offseason, also for nothing.

The only veteran left from the team is Lowry, who now seems to be next on the chopping block if Toronto wants to get some kind of return for him.

Lowry, 34, is on an expiring deal as the Raptors try to figure out what exactly they will do with the trade deadline approaching.

Here is what Jake Fischer of Bleacher Report said:

“There is a portion of Raptors personnel, league sources said, that believes the franchise should bid its beloved All-Star farewell and begin Toronto’s next chapter in earnest.”

There are some important things to remember in terms of the differences between Gasol/Ibaka and Lowry.

First, the Raptors were defending champions looking for another deep postseason run.

Unfortunately, this season they’ve dropped to 10-13 and sit in ninth place in the Eastern Conference.

While they could still compete for playoff positioning, it wouldn’t be the same as try trying to contend for a title like in years past.

Second, Gasol/Ibaka were not long-time staples of the franchise, while Lowry has represented the city of Toronto for the past nine years.

But the relationship between the Raptors and Lowry hasn’t always been concilatory.

In fact, back in 2013 and 2014, Toronto had talked about trading their All-Star guard to the Knicks.

Following the title season, Lowry did say he either wanted a trade or a contract extension.

He got the extension, but there was another scenario that almost played out with Lowry being traded away during their championship season.

Here is another excerpt from Fischer of Bleacher Report:

“Toronto also discussed Lowry before the February 2019 trade deadline with Memphis, according to league sources, and almost added him to that eventual Jonas Valanciunas package, which would have landed Mike Conley with the Raptors alongside Marc Gasol. Those negotiations were so advanced, sources said, Lowry himself was made aware of the talks, and Grizzlies officials even told other front offices they were nearing a deal. Toronto sniffed the market for Lowry before the 2020 deadline as well, sources said.”

It will be interesting to see what develops this trade deadline with Kyle Lowry, but the end of an era in Toronto may be closer than most think.