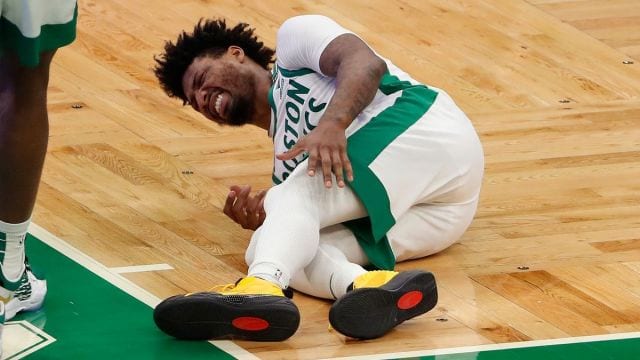 Boston Celtics’ guard Marcus Smart has a grade 1 left calf strain, according to a team announcement made Sunday.

Smart will miss two to three weeks, but a source close to ESPN’s Adrian Wojnarowski said that there is optimism within the team that his return time could be closer to one to two weeks.

Smart had an MRI done on Sunday night after leaving in the fourth quarter of Boston’s 96-95 loss to the Los Angeles Lakers.

Entering the game, Smart was averaging 13.2 points and six assists, which are both career highs.

In the game, Smart did not appear to land on anyone else’s foot as he came down in front of the Boston bench while fighting for a rebound with 10 minutes and 31 seconds left in the fourth quarter.

Afterward Smart collapsed to the ground while grabbing the back of his leg in pain.

The Celtics called a timeout and helped Smart off the court after he laid on the ground for a while.

Smart couldn’t put any wait on the leg as he limped off to the locker room helped by two Celtics’ staff.

The Celtics begin a five-game West Coast trip starting on Tuesday in San Francisco against the Golden State Warriors without Smart.

Boston has lost two games in a row.