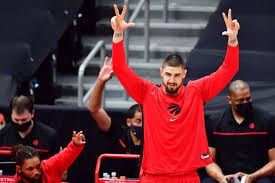 The Washington Wizards have stalled out of the gates this season despite stellar play from guard Bradley Beal and the presence of of former MVP Russell Westbrook.

COVID-19 has been another issue.

So far, the Wizards have reportedly had six players test positive for the coronavirus.

The positive tests have basically guaranteed that Washington had no chance of being at full-health for the first quarter of the season.

But the Wizards are persisting with the signing of big-men Alex Len and Jordan Bell.

Len, a former fifth overall pick, is a seven-foot center who can space the floor with decent shooting.

Bell, a former second round pick, impressed NBA scouts out of the gate with a high motor, but has since struggled to find a role as an undersized center in the NBA.

The Wizards will likely ask Len and Bell to contribute immediately as injuries continue to ravage their roster.