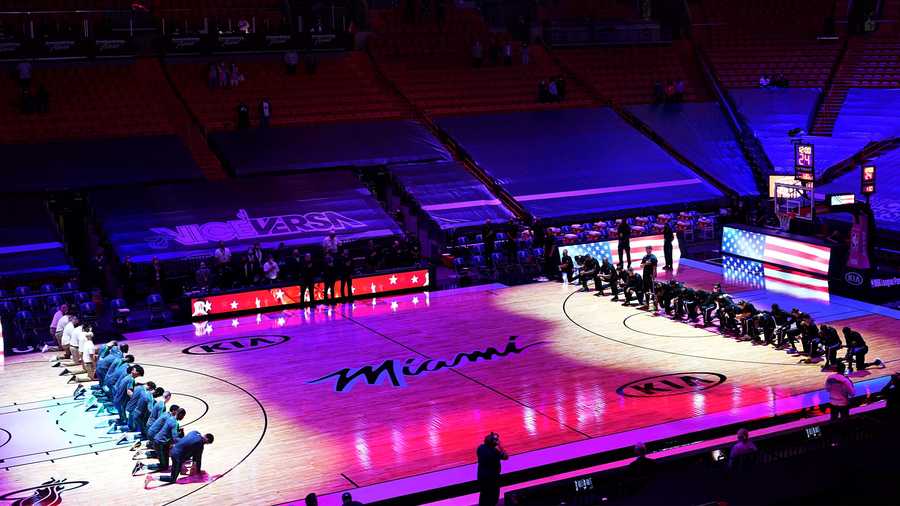 Twenty-two NBA teams took the court on Wednesday night despite a MAGA insurrection at the U.S. Capitol.

The Miami Heat and the Boston Celtics knelt during the national anthem before tip-off and other teams proceeded with their games just hours after thousands of Donald Trump supporters stormed the Capitol while lawmakers counted Electoral College votes affirming Joe Biden as the next US President.

Shocking video of rioters roaming the hallways dominated the news and inspired responses from the Heat and others around the league.

Statement from the players of the Boston Celtics and the Miami HEAT#BlackLivesStillMatter pic.twitter.com/RtpAOJfxh3

NBPA executive director Michele Roberts called out what she and many players saw as a double standard for the MAGA rioters, especially in the wake of the Jacob Blake shooting.

“Today started yesterday, when the Jacob Blake shooting was being justified, although I’m not sure there was a single human surprised at that finding,” Roberts told ESPN. “Every single player that contacted me — or that I contacted — saw the same connection to the Blake shooting being justified. We were watching these people essentially committing treason at the Capitol, and I have yet to hear about a single shot being fired.

“We saw a Black police officer being chased, and players said to me, ‘So this is what they can do?’ And people don’t get this privilege stuff? I know how they’re feeling. I am so angry and pained — and refusing to cry. It reminded me of something that James Baldwin said when asked what it was like to be a Negro in the United States of America. He said that ‘if you’re conscious of what’s going on in the country, and you’re a Negro, you’re in a constant state of rage.'”

There is no word on whether the league may cancel games in the next few days as the country comes to grips with this insurrection.