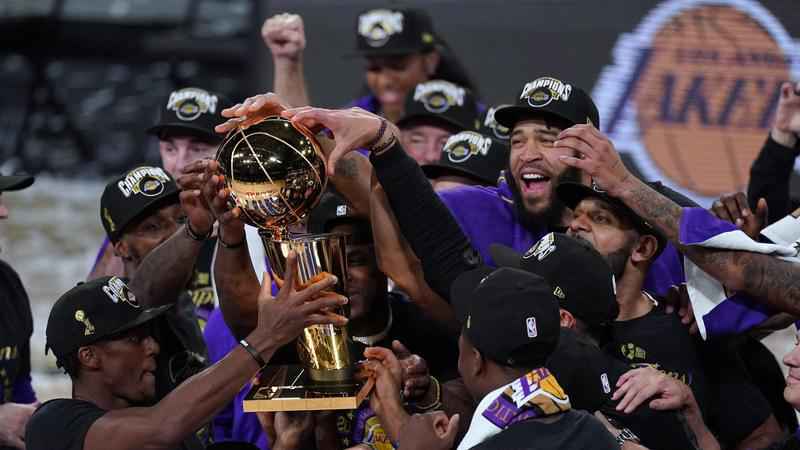 The Los Angeles Lakers won their record-tying 17th NBA title only two months ago after defeating the Miami Heat in six games.

Announcer Mike Breen called the closing seconds of that final game by proclaiming “Banner No. 17 will soon hang in the rafters.”

He was right about the “hang” part, but when fans will actually be able to see the banner is unknown.

LA plans on keeping the 2019-20 championship banner under a black cloak until fans are allowed back into Staples Center.

The message, “Stay tuned, Lakers family,” was printed in gold block letters on the cloak for opening night.

The last time fans gathered at Staples Center was on March 1o, 2019.

In late November, the LA County Department of Health issued an order that prohibits all public and private gatherings of individuals not from the same household.

“We’ve obviously been awarded the trophy. And [Tuesday] night we’ll award the rings,” Harris told ESPN. “And we want to wait, if we can, with all hope, until we have a chance to unveil the banner with the owners of the banners — which is the fans — there with us.”

As for the black cloak, Harris explained, “It’s saying, ‘We’re going to wait for you.'”

The Los Angeles Lakers’ players are expected to receive their rings with all the pomp and glory that comes with a Lakers title celebration.

“For the banner, we’re missing part of that. We’re missing a component to it, and that is the people who are a big part of winning this, and that’s the fans. So we’ll wait.”